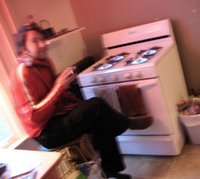 I woke up yesterday morning to the sound of four gas burners clicking on and wooshing into flame, one after another. Here's what I found after extracting myself from bed, the only place in the apartment that is warm and sometimes not even that: Bova, friend and fellow itinerant who is currently homesteading in Columbus, huddled on a stool next to the stove. The heat isn't working. We both felt expletive-y.

Bova's boyfriend Rem gave me and Bova a detailed tutorial on how to plastic windows so as to reduce the indoor freeze.


To reach the top of the window Rem stood on a lawnmower that kept rolling backwards so Bova or I braced the mower with our feet in addition to drinking Natural Ice and listening carefully. Rem loves to plastic the windows. He doesn't even mind the idea of spending an entire weekend sticking down tape, stretching plastic over the tape, and heating said plastic on every single last window of the whole house that he owns.

I think this is because he thinks the gun part is fun. When we got to the part of the tutorial where we needed the gun, Rem got kinda excited and said, "You haven't even seen the best part!" and presented the wheel of extension cord that allows him to roam the floor freely, heat gun in hand.

He referred to the extension cord wheel as FORTY FEET OF HAPPINESS.
Posted by ronckytonk at 3:26 PM