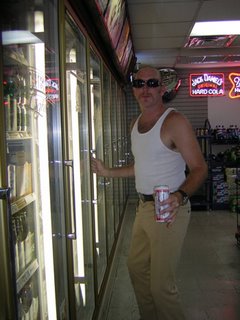 A couple of days ago Kyle called while I was walking to a Marathon gas station to buy a six pack of Bud Light. We discussed a sweeping number of subjects which include but are not limited to the following:

4) How I once slow danced to karaoke in Cody, WY

5) How I was considering crawling into bed to drink my beer under the covers because IT IS SO COLD IN OHIO.

6) Why Tara Reid should die.

Kyle admitted, when pressed, that he could never really kill anyone. He would just talk to Tara until she was crying and laying in a heap on the ground. Then he'd walk away. "Lighting a cigarette," I volunteered.

Now a tour leader in the Western U.S. for Bicycle Adventures, Kyle enjoys notoriety as a former cab driver, concessions manager for the circus, and for helping launch what was to be the largest World's Fair in history. Instead it was, as he put it, "one of the most devastating financial debacles of the twentieth century, which certainly didn't help the people of Germany with their already less-than-sugary demeanor."

Kyle still sets aside one month a year to go to the Western Washington State Fair in Puyallup, WA where he "helps the folks of the greater Tacoma area to become the biggest people they can possibly be."

Thanks for that, Kyle.
Posted by ronckytonk at 5:11 PM

You are a Ronckytonk Rock Star!