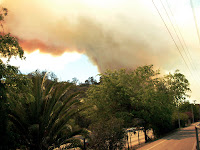 Riding along the bike path last week I vaguely wondered what was up with the orange-colored cloud coming from the west.

Anywhere else I'd assume that clouds shouldn't billow furiously in shades of beige and orange. Anywhere else I'd say that a cloud that blocks the sun so urgently that I must take off my sunglasses to keep from crashing into the guardrail between me and the Los Angeles River is just not right. 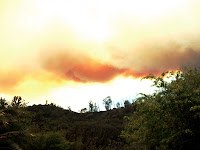 But I really don't know what to expect from LA. One day a helicopter circled over my neighborhood, Atwater Village, while I was sitting in the backyard.

"Do they shoot people from helicopters here?" I asked Frank.

"This is Los Angeles, not Beirut." He said.

The LA River looks placid with ducks and reedy vegetation but I have a feeling those ducks are paddling with a couple of extra feet under the water. I am not into the idea of one day birthing a child who has flippers. Nor would I want my flipper baby shot by the police helicopters but I might be overreacting.

The day of the orange cloud I watched the other cyclists the way I watch flight attendants during turbulence - for a clue as to when to start freaking out. The cyclists, not surprisingly, were being cool about it. I imitated them and cast bored glances toward the cloud, which I secretly thought was looking more and more of how I imagine the kickoff of the day of reckoning.

I asked myself why I was still riding towards apocalypse cloud and remembered September 11, 2001, when I happened to be driving a 15-passenger van full of people from Ithaca to Manhattan while simultaneously listening to the radio and shitting my pants over what was happening at the World Trade Center. 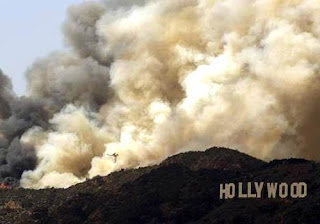 What I didn't yet know last week was that a couple of bozo kids from Chicago were playing with fireworks up in the hills and set a 160-acre brush fire that looked like this from other parts of the city. (Photo credit: LATimes)

This means that the smog here is not THAT BAD (yay!) and that sometimes teenagers are idiots. Matt's truck didn't burn to the ground though it was within 50 feet of burning to the ground, good news indeed. And finally, the cloud was unrelated to both the trumpet of doom and the tribunal of penance. Awesome.
Posted by ronckytonk at 7:49 PM