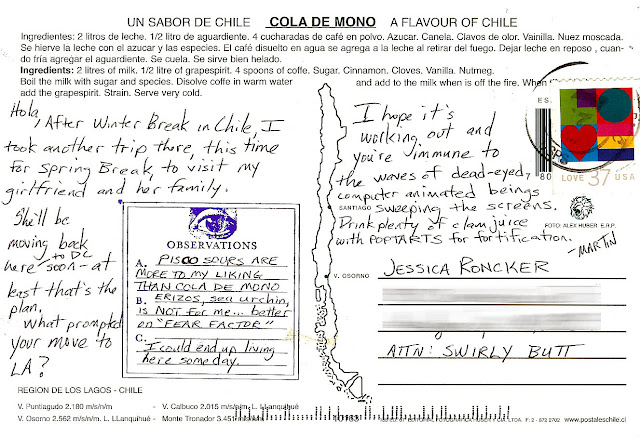 What I like about this is that I've known MARTIN, who will be capitalized until I'm allowed to call him by the nickname that he doesn't care for, for 14 years and while we haven't seen each other in a long time, I just got this postcard from him telling me to drink clam juice and eat Pop Tarts.

TO FORTIFY MYSELF AND BUILD UP AN IMMUNITY AGAINST LOS ANGELES.

I don't know if MARTIN did this on purpose but, ironically, Pop Tarts were my link to Hollywood. Before the summer of 2005, when I was the towel and laundry girl for the American Idol tour, I don't know that I'd ever eaten a Pop Tart and certainly had no strong feelings about them. Now I have night terrors overlaid with an announcer's voice booming, "Kellogg's Pop Tarts Presents American Idols Liiiiive!" and mere mention of the strawberry milkshake flavor, especially when followed up with the words "Freeze 'Em and Eat 'Em!", gives me mental bulimia.

That summer I was friends with Alan (nickname Milky, as in Strawberry) whose job it was to traipse around the arena floor in a full-sized Pop Tart costume posing for photos and high-fiving fans who I would like to say were kids but who were actually mostly middle aged women.

My job, in addition to leaving towels in dressing rooms and making sure someone did the laundry in each city, was also to hang fifteen 8-foot-tall Pop Tart banners in each arena before the concert. Towards the end of the tour, I was so fucking sick of those banners that I made the executive decision to throw a bunch of them in the commercial-sized trash compactor at the Portland, Maine venue.

There was no practical reason to do this unless you consider I was PRACTICALLY going to lose it if I had to deal with one more daily reminder that Kellogg's Pop Tarts was presenting American Idols Live.

It was an emotionally satisfying and therapeutic situation. Right up until I got a radio call from the Pop Tart crew leader, Marisa, asking me to hang up all the extra banners for the benefit of the executives coming to the show. I paused, had a moment of silence, and then asked her over the radio to meet me in the production office so I could tell her something. 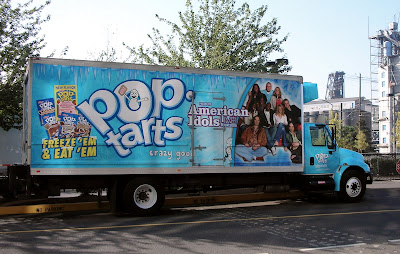 Last summer, as assistant tour manager, I had more distance from the tens and tens of thousands of Pop Tarts following us around in the refrigerated truck. I spent more time in the office and less on the concourse, so it was easier to ignore the Pop Tart dance floor and Pop Tart karaoke machine. And there was no Pop Tart flavor request list posted on the bus so I didn't even have to trouble myself to write POO on it.


But anyway, MARTIN, thanks for the suggestion.
Posted by ronckytonk at 6:11 PM