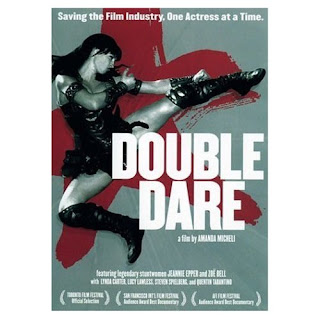 I did web research on Zoe Bell and the next day we rented the documentary Double Dare.

Between the video store and home, we stopped at the supermarket for movie snacks. After we both made fun of the vitamin-fortified tortilla chips, Frank heckled me for stopping in front of the bags of Veggie Booty.

"I know you," he said, "You had to stop as soon as you saw with spinach and kale."

Frank does an impression of me staring at the Veggie Booty, mouth hanging open.

We were suckered into a three for $5 deal and got Veggie Booty AND Pirate's Booty and Pirate's Cannon Balls. Hell yes. And tortilla chips and salsa. And two bottles of Lambic.

"Do you want me to take any of those?" I asked Frank, who was carrying all four bags. He shook his head and I said, "YOU DON'T MIND BEING SO FAT?"

"Damn," he said, looking at me strangely.

And I did what sometimes happens when what I say comes out wrong: laugh uncontrollably without explaining. This is sad because the other person, understandably, doesn't know that I'm laughing at myself, not at them. It's a total jerk move and I inadvertently do it on a semi-regular basis.

At checkout, the cashier sees that Frank's bag/arm ratio is high and invites him to put the snacks on the counter. I decide to make another joke because theoretically it would be funny since it would be so obviously on purpose and not a mistake. I go to whisper, "Tell him your fat arms are getting tired," but what came out was, "Tell him your fat ti...ARMS are getting tired."

Frank: "You almost just said that my FAT TIRE IS GETTING TIRED."

Which, fuck, was true. And we decided then that it was ironic to get all psyched over a film about ladies who are cool because they seem so fun and active and alive while we have a hard time just carrying all of our chips to the couch.

Double Dare involves Zoe doing crazy shit like being lit on fire while spiraling through the air as Xena the Warrior Princess's double in New Zealand, then visiting LA and wearing a PVC dress to the World Stunt Awards where she fell into the bushes.

It's about her moving to California and staying with Jeannie Epper, Lynda Carter's stunt double from Wonder Woman, and flipping off a 35-foot tower onto a air mattress and auditioning for Quentin Tarantino to be Uma Thurman's double in Kill Bill.

It's about the Hollywood stunt world and Zoe and Jeannie's friendship and it made me, just like after seeing Death Proof, want to drink beer and crack jokes with Zoe or maybe go on joy rides in other people's cars, hit punching bags, learn how to walk in plastic dresses, get things pierced, and do stunt training, though I'd probably just bounce mildly on the trampoline or read while she hurled herself off a building or something.
Posted by ronckytonk at 8:18 PM