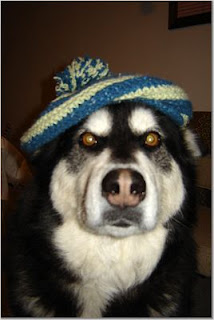 What you don't see in this photo is the Alaskan Malamute licking and eating deer carcasses or tearing a mouse's head from its shoulders as I once witnessed. Gail pointed out that the mouse beheading wasn't as "bad" as I shrieked so I stood corrected and agreed that, yes, it's just nature.

But how much did I want to laugh when shortly thereafter, Iska clobbered the baby's face with a huge, wet, mouse-flavored kiss in front of Gail's mom, who didn't know about the rodent breath? 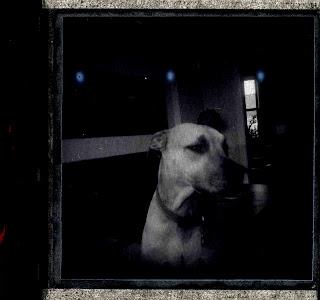 I don't know if John Cusack would agree but I think it's hilarious that she attacked him when he came to Sunny and Shane's door. He had a scarf on his head so he was unrecognizable to Lulu who otherwise surely would have identified him from Better Off Dead and High Fidelity.

I only met Yogi once when I helped walk him around the East Village but that walk alone gave me no doubt that this is a spirited dog who would enjoy a good Jewish holiday like Purim. Yogi is not the kind of dog to deny feasting and gladness and commemoration of the time when the Jewish people in Persia were saved from extermination.

Whether or not Yogi drank, as the Talmud says, until he couldn't tell the difference between "cursed be Haman" and "blessed be Mordecai" is hard to say but I'm sure he stood by Ariel's side during this joyous time. 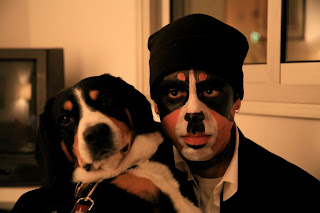 Posted by ronckytonk at 8:03 PM