I want to AT LEAST hang out with stuntwomen

Last week someone walked off with the catalytic converter from under Frank's Toyota 4Runner and we learned that people do this for the platinum and other precious metals inside.

When we were told that they especially like ripping off 4Runners and that it happens kind of all the time, Frank threw down the few hundred bucks for a new catalytic converter and then rigged the shit out of it.

I believe the message that the chicken wire, chain link, and padlock sends is:

With the new catalytic converter, the engine's noise is now a teensy bit more evocative of monster truck shows and drag races. And we didn't know if we liked this, but we were immediately resigned since we'd already spent too many hours on the topic and the thought of going back to the mechanic made us want to lay down and take a couple of long, relieving dirtnaps. 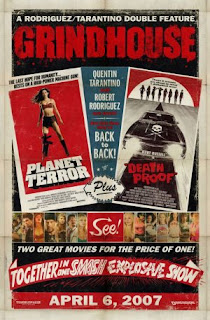 This week I avoided driving the T4R and stayed out of it until we went to the Vista Theatre on Friday night to see Grindhouse.

When Frank and my super film geek friend, Matt, talked about Grindhouse before, I apparently spaced out because I knew nothing about what to expect. Not that it was a double feature sandwiched between fake trailers. Or that it was aping the 1970s 'grindhouse' theaters that showed double/triple B-movies. Or that these films by Robert Rodriguez and Quentin Tarantino featured zombies and jars full of nutsacks (Planet Terror) or stuntwomen and my favorite place to get a taco special in Austin, Guero's (Death Proof).

And I didn't know about Zoe Bell. Here you see Zoe hanging on to the roof of a Dodge Challenger while being chased by maniacal killer Kurt Russell. Earlier in the movie she's a funny, laughing girl who reminds me of people I know and like. Then she turns into a bad ass of staggering proportions. I am impressed.

I want to have a beer with ZB and maybe get a back handspring lesson because I'm suddenly really bummed that I quit gymnastics and martial arts. I COULD BE A STUNTWOMAN RIGHT NOW. If I hadn't quit every sport I played and if I hadn't been afraid of heights and if I'd had a slightly different personality.

And I wasn't the only one affected by ZB and wanting to get my thug on. While driving home, Frank might have mentioned that now he's glad the new catalytic converter is a little louder, because we sound TOUGH.
Posted by ronckytonk at 8:47 PM

Zoe Bell is nothing other than awesome!

Come join us?
http://livejournal.com/community/zoebell
(most informational Zoe Bell site on the net!)