I didn't intend to embark on a Black History Odyssey this summer but, unexpectedly, I have. It began on the first Idol tour day off in Atlanta. The previous night, I'd wandered into the office of our promoters John and Andrew who are devoted to creating spectacular days off. When everyone else is drooling over the side of the hotel bed and going to the mall, Andrew and John will be on their way to see the local interest, be it history (ex: of Aviation, of Spam), pretty places (ex: nature) or oddities (ex: Cockroach Hall of Fame).

One of them suggested the Martin Luther King, Jr. National Historic Site to me when I said I wanted to have a memorable day off. Run by the National Park Service, the site is in the Atlanta neighborhood where MLK, Jr. grew up and includes the church where he and his father preached, ranger-led tours of his birth home, a visitor center with a museum-quality exhibit, video theater, and an international world peace rose garden.

I went there after catching up on sleep and arrived too late in the afternoon to get on a tour of MLK, Jr's birth home but ended up spending the afternoon in his church. And it was good. The amount of energy and money that went into this tribute to Dr. King was evident and I left feeling chock-full of peace, love, and big hugs.

The fact that our tour started in the South and stayed there a week before heading to Texas and California contributed to my accidental Black History Odyssey. The morning of our show in Little Rock, Arkansas, I planned to visit Central High School, the site of where, 50 years ago, the Arkansas National Guard escorted nine black students to their classes through a mob of angry segregationists.
Unfortunately a downpour of rain started RIGHT when I stepped outside the hotel and I immediately turned into a big baby and went straight back to my bedroom to crawl under the covers. Perhaps not one of my shiningest moments. Anyway. 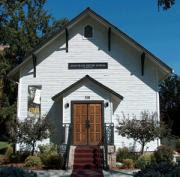 After we made it out west, our buses crept up the coast and took a right. The day that I walked around Boise in search of a two-headed calf and found so much more (a hippie festival and a LIBRARY!) took me through Julia Davis park, home of the Idaho Black History Museum, where I performed an extravagant double take.

I went closer to the little building to make sure I was reading the sign correctly. I'd been walking around Boise for several hours and had seen maybe two people of color. It was Sunday and there were people everywhere and they all looked like me. I mentioned the museum to Neil and we checked out its website. We learned that the Idaho Black History Museum is the only African-American history museum in the Pacific Northwest. It's open five hours a week, on Saturday. The current exhibit is called "The Invisible Idahoan: 200 Years of Blacks in Idaho."

Here Neil offered that the only other Black people he'd seen in Boise were the four stagehands out by the loading dock. We asked the local runner about that and he said that those four were about ten percent of Boise's Black population. I'm sure he exaggerated for our benefit since we were by then fairly wound up on the subject but invisible, indeed.

The museum is in the former St. Paul Baptist Church and exists largely because of Dr. Mamie Oliver, a woman who became Boise State University's first African-American professor in 1972 and whose research and teaching is the foundation for Black History awareness in Idaho.

Next stop on the Black History Odyssey: Omaha, Nebraska.
Posted by ronckytonk at 5:43 PM