I didn't know Casey even had shoulders

I was psyched to discover in Chicago that I still had an unexpired CTA public transit card in my wallet. I asked the hotel concierge for directions to the closest blue train and walked three blocks to Clark and Lake, feeling majorly crushed out on Chicago. On the subway platform, my crush intensified.

I loved the punk rock girl with the bullet belt. And the people with suitcases who made their way to O'Hare airport. I liked the thug who stared at the third rail, nodding to the beats in his earphones. Most of all, I felt something special for the guy I overheard talking about the barbeque he was headed to.

Because CHICAGOANS KNOW A BARBEQUE. It's not even seasonal, either. I personally saw Shane throw sausages on the grill during an especially unholy stretch of winter. After shoveling two flights of steps on the back deck in his puffy coat. Shane, being from Chicago, is committed enough to do what it takes to barbeque, whatever that might be: crampons, ice shelter, etc. So now? In the thick heat of August? You know it's out of control.

I got off the train and walked down Damen Avenue to Casey's house. And the entire walk, I felt just as I did in third grade when I got glasses and suddenly saw all this stuff in the world that I hadn't before:

The trees! So green! So blue the sky! Outdoor tables! Full of people smiling, laughing, and wearing sunglasses! All that skin! So tan! Chicago summer, finally! At Casey's apartment building, I rang her doorbell and she buzzed me in.

"Do you like my sandals?" She asked me before I'd fully rounded the corner from the steps to her doorway.

"Wow," I said. "WOW. Where'd you get those? Payless?" Which, looking back, is a pretty bitchy question. 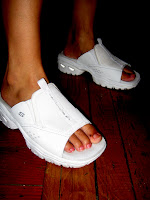 Luckily Casey thought it was funny since the whole reason she'd said anything is because she thinks they are terrible to look at. But comfortable. And she won't wear them outside, even though I told her I think they are totally appropriate for the pool. If you are my grandma.

"Casey," I said. "You look different. It's not just the elderly sandals that you bought online."

The last time I saw her was in Chicago, right before I left for LA. It was March, so she was still wearing the knee-length down jacket that she had on every single other time I saw her last winter. Now she's sporting this Panamanian skin everywhere, on her shoulders and arms and legs. I hardly recognized her. 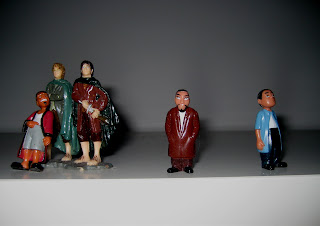 What I did recognize was the HOMIES collection displayed around Casey's apartment. Here you see not only Homies but the Caucasian types in capes who are representing, I don't know, the Middle Ages of Europe? Maybe they're wizards. I seriously have no idea. Lisa, my former boss at the Feminist Press, gave them to me. They used to sit atop the computer in her office. Now they are holding up the weight of homeboy who appears to be wearing a robe. I passed them on to Casey as a going away present when I left Chicago. 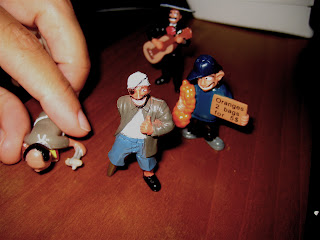 Posted by ronckytonk at 7:51 PM

I heart Chicago in the summer so, so much. I spent the entire summer I lived there falling in love with the city instead of with boys. (Back then, for me, that meant a lot.)

Jealous that you're with my ex...

sadly my fling with your ex was short. I'm in St. Louis now and on to Ohio tonight. now I KNOW you're jealous, zan. sweet sweet ohio.

OMG squared. The homies!!! Where the hell did I get those....ah, one of my youthful indulgences no doubt, obviously one which has stained my memory banks.

More jealous than you can ever know.