The last time I was in Pittsburgh, on a whipping cold day in January, I thought about plunging headfirst into a depression because everyone I passed on the streets looked so sad. The downtown blocks surrounding my hotel were sleet grey and winter dingy, full of un-remodeled drugstores, fast food restaurants, and jewelers whose signs were missing a letter.

Today, however? Warm and cloudy with slightly less flash flooding than yesterday.

Yesterday I sat at a table by a window and watched it start to rain. I drank a glass of pinot grigio and I ate portabello soup and I didn't even once want to pull out a book or make a phone call and share it with anyone or think about anything else because the sky was a perfect shade of blue-grey dusk turning to storm. I just needed to watch.

When the three ladies sitting at an adjacent table turned their conversation from migraines and favorite shows on HBO to comparing American Idol to High School Musical, I smiled and concentrated even harder on the gathering clouds.

Today Leila and I went to the Mattress Factory, a contemporary art museum that's in a building I'm just guessing used to be a mattress factory. It was, as Leila would say, frakkin' cool.

I'm not so proud that I won't admit that I came very, very close to wetting my pants due to a primal fear that snuck up on me while we walked through a dark installation.

"I don't care if you bungee jump over parking lots in Vegas, you are still the little girl who cries when she wakes up from naps." 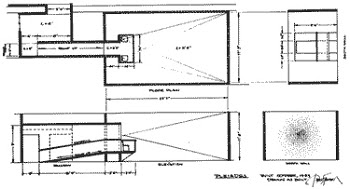 The work, by James Turrell, was about dark and light and took some walking through the pure black of enclosed corridors and rooms.

When we stepped off the elevator, we read the map and tried to follow its directions about turning corners and standing still and walking slowly forward and retracing steps and turning other corners.

But it was confusing and basically what happened is that as soon I couldn't see anything, I grabbed Leila's shoulder and buried my nose into it while taking baby steps behind her and stepping on the backs of her shoes. She handled this really well. 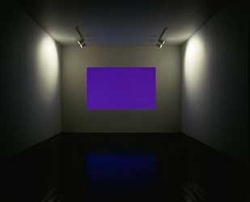 At one point, after leaving the room with the ultraviolet light box, which also made me inexplicably nervous, we took a left and inched forward slowly, slowly, slowly, and crashed straight into a wall. This is where I had to lean over with my legs crossed. Just for a minute.

When I recovered (no piss, or not much), we bravely continued, AFTER staring confused at a dimly-lit elevator and wondering if it was art before deciding it was just an elevator.

In the Pleiades room, I did my best to sit in a chair and let my eyes adjust to the pitch darkness long enough to see the image projected in front of me. I made it close to the recommended 15 minutes. Only about 9 of those minutes were spent thinking, "WHAT IF SOMEONE HAD BEEN SITTING IN THIS CHAIR WHEN I FELT AROUND FOR IT IN THE DARK? How deeply would I have lost control?" 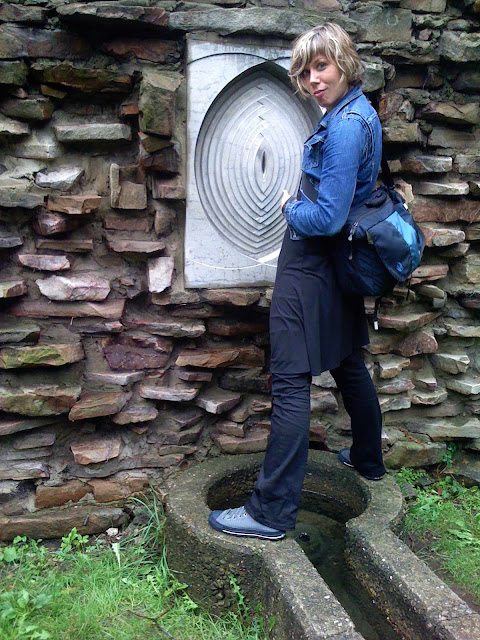 Back outside, in the garden installation by Winifred Lutz, I admired the sexy-looking stone thingie on the wall and the other sexy-looking doodad on the ground.

According to the Mattress Factory, "The viewfinder at the end of the water trough is in the form of two intersecting circles which occurs as a symbol in Christian art. Symbolizing overlapping concepts, in the most basic sense it represents the profane and the sacred."

Sure, absolutely, that's pretty much what I thought right away, too.

Later, I walked across the Smithfield Street Bridge, right after getting caught under an awning during another downpour and watching the riverboats and summer storm and hills and graffiti that seem so familiar and remind me of home.