I wanted to see how many New York experiences I could pull off in one 24-hour period so after I visited Jocardo's classroom in the Bronx and before I drank Heineken in Cathy's Flatbush apartment and before I sat five hours with someone in a Manhattan emergency room, I took the ferry to Staten Island with Matt.

Ray had invited us to have dinner at his restaurant and he planned to pick us up at 4:00. What he didn't plan on was the chaos of a few totally manageable-looking snowflakes. Certainly he didn't plan to lose control of his car and its locked brakes and slide down a hill through an intersection and two lanes of traffic before coming to a stop in a church parking lot.

Ray escaped without a scrape only because the two lanes of traffic he blitzed through were jammed by another accident down the road. A school bus had slid into a city bus and the entire neighborhood was at a standstill due to the sudden snowfall, spinning tires, and small pile ups.

Which makes me realize, again, how I shouldn't make fun of meteorological/physical phenomena that I just haven't figured out yet. Black ice, for one, which I used to think was an excuse of pussies who don't know how to drive. Before that, tsunamis.

Ten years ago, I giggled through an earthquake on the Ecuadorian beach and made a lot of noise of how extremely fun it had been. Pabel, annoyed, reminded me that it would not have been hilarious if the quake's center had been under the ocean floor and created a giant wave able to wipe out everything in sight.

AS IF THAT COULD HAPPEN, I responded.

Matt and I walked a path along the water until we got to the road where Ray was stopped. We called in an order for ribs and soup from the restaurant, parked the car, and walked up the hill to Ray and Maureen's home.

At their house, we discovered the HEATED FLOOR of the kitchen, thereby giving me a new lifetime goal: 1. Visit Asia 2. Have a heated floor. Matt and I laid down flat on the tiles, exposing as much of our body surface to direct heat as possible while Ray mixed drinks.

After eating and sitting by the fire, Ray went into the kitchen to heat up the lasagna he was bringing back to our hotel where he was doing the overnight security shift for our tour group.

The lasagna was a gift for the other security people and there was a lot of it: TWENTY-TWO-AND-A-HALF POUNDS to be exact. It was in a large tin catering dish, the kind used to serve banquets and buffets, and Ray thought he'd get it across the ferry by pulling it in Maureen's suitcase.

Maureen was skeptical. About leakage. And Maureen had a point. I wouldn't want to show up on my Caribbean vacation smelling like lasagna, either. I suggested garbage bags and Maureen seconded my motion but Ray was unmoved.

And it WAS leaking by the time we left the house. Still, I was pleased to have the chance to witness someone trudging through the snow in Battery Park holding a suitcase of lasagna on his head. 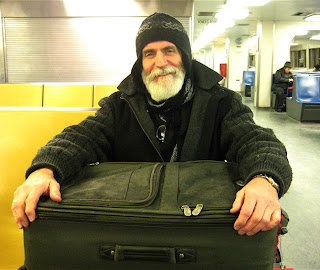 Posted by ronckytonk at 9:45 AM