Last week my dad told me that Mema was dying. I went to the Manchester cathedral and wrote her name on a stone and then flew back to the States and home to Cincinnati.

I hadn't been home since last March, a long time. When I knew I was going to Ohio, I emailed Matthew Eisen and asked if he was still there. I hadn't seen Matt in a few years, since he'd visited me in Guatemala. Before that, we'd seen each other in New York and in El Salvador, where he lives.

I met Matthew and his brother, Dennis, for coffee at a roastery downtown, not far from the building where we'd been roommates almost fifteen years ago. A man we'd worked with in the neighborhood came in and Matt shook his hand and reintroduced us to each other.

"Jessica Roncker!" The man laughed, "I wouldn't have recognized you."

"I was just out of high school the last time you saw me," I said.

We called Andy, another former roommate, and he stopped by to sit with us for a few minutes during his lunch break.

"Nick DiNardo please," I said into the phone.

"Hi Nick, this is Jess Roncker."

We lured Nick away from his law office and he called his wife, Anne, to come join our impromptu reunion.

I was standing near the cafe door when I spotted Larry, who's lived across the street from my family my entire life. We said hello and he introduced the man with him as Mr. Abel, who used to live down our street, too, before moving away when I was still a child. It was between then and going out that night to meet Dennis, Matthew, and Nick for Guinness and pool that a very simple idea occurred to me. 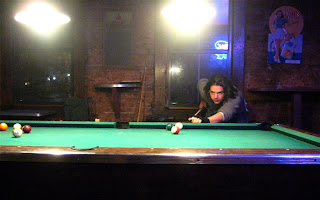 Part of the reason that I'm able to comfortably travel, live out of suitcases, change addresses, and inhabit new worlds is that I have such stable roots. I maintain relationships from every point between childhood to now and when I'm back in the 'Nati, my history is woven into almost every exchange. I know where I can always return to.

Does that mean that I'm ALWAYS comfortable with my choices? No. But is anyone? Don't we all question our motives sometimes? Wonder about other possibilities?

I spent the last few years craving stability. I didn't really DO much to be less mobile, I just kind of THOUGHT about it. I wanted to balance touring and travel with something: maybe a relationship or a couch or something else big and heavy that I couldn't fit in a storage space or the back of a car. Something that signified that I had a place, a physical space, to come home to no matter where I'd been. Safety. 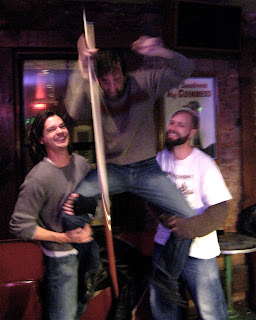 At Mema's reception, my uncle asked me about California. I told him that I didn't know, since I don't really live there anymore, or anywhere. I broke up with Frank, I said, and my stuff is in storage.

"So you're alone again?"

I paused for a minute, surprised, "Yep."

But I knew that wasn't true. I just didn't want to explain right then; it didn't feel appropriate. His question stung momentarily, until I had another big simple realization.

You want to know when I REALLY was alone? When I was out in California, trying to fit someone else's mold of something, someone else's idea of a relationship that didn't make sense to me. I hadn't bought a couch yet, but I'd bought a bed and chairs and - sit down - was considering buying a car. I was trying, I was really, really trying. But I was stranded. 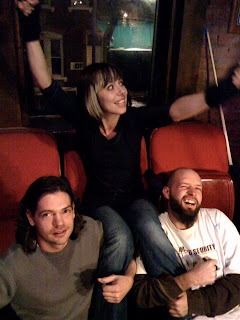 So what does that mean? Not that I'm anti-relationship. I'm only anti- relationships that shut me down instead of opening me up. It means that I've learned more about myself. I won't go for anyone else's standard of normality if it doesn't feel good. I won't cram myself into an uncomfortable space.

My ideal relationship might not look like a lot of others. And that's great. If I can create a unique kind of relationship with someone, fantastic, but even if/when that happens I'll still want to live creatively and intuitively with a lot of improvisation. Maybe something in the future will inspire me to buy furniture or maybe there will be someone who isn't that into furniture either. Maybe one day I'll buy a house. Just not now. 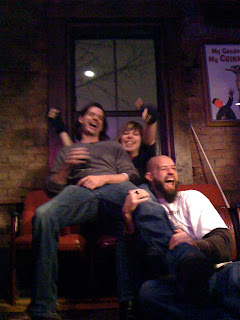 I don't need a mortgage to feel safe or a husband to feel loved. I don't need a leather couch. I don't even really need a room at the moment. Things may change - of course they may - but how good does it feel not to measure myself up to other people and to let go of that secret, nagging feeling that had been making me wonder if I'm missing something?

I would kind of like a folding bike. And maybe that hot new mac that weighs, like, nothing because that'll be awesome for traveling.
Posted by ronckytonk at 12:45 PM

how i miss arlin's aka hee haw, let me count the ways. was turkish elvis there? commerce?

milton's baby milton's. i WISH commerce was there - we coulda done a jig together, a little air keyboard.

ahhh, you must have been reading my mind this morning as i showered, spilled coffee all over the mortgage statement, scooted the dogs off of the pleather couch and drove the same f'ing route to work that i drive everyday... dogding gang signs and dirty snow drifts. super fun way to spend a tuesday morning....
the whole measuring up thing bites... especially when there's no one real good to measure up to. now, if you were actually around and not in cyberspace, it'd be fun to measure up to you. then, at least, i know i'd be having some fun on a tuesday morning.
can't wait to talk further on this subject sprawled on a white sofa somewhere in the middle of texas.
xxxx
b2

No relationship should make you feel like you need to change. It is like toxic waste to the soul.