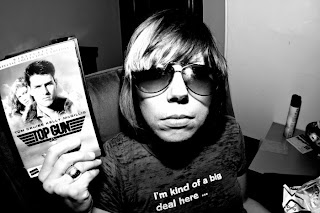 A few days ago Matt and I gave each other a high five and brought it all the way around for a slap at the bottom of the circle.

Matt pointed out that it was the same move from the beach volleyball scene in Top Gun when Maverick and Goose are totally kicking ass against Val Kilmer which naturally made us both start singing.

Kenny Loggins, thank you so much. Twenty years ago, I was all into Top Gun. The bomber jackets, Tom Cruise before he was crazy, and the movie's sexual tension which I innocently thought was between Tom Cruise and Kelly McGillis and which I now realize was between ALL THE DUDES IN THE MOVIE.

It was leap year, February 29. Matt and I wondered what we should do on the day that didn't usually happen, what would we usually not do?

All we needed were aviator glasses and cutoffs. At least this was what we thought before we actually re-watched the volleyball scene and realized the characters didn't cut their pants off, that they sweated into their jeans, befitting the rest of the film, which is

Every other shot featured some hot shiny face, dripping through more painful dialogue. 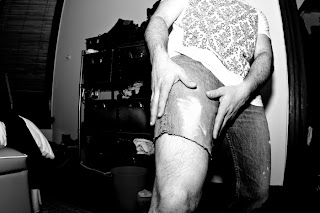 And yeah, I know I was still a kid in 1986, desperately wanting to believe that adults could figure out how to face their fears/rattle their family skeletons while successfully charming the pants off their sexy boss AND exchanging extremely homoerotic banter with their peers in an hour and a half but seriously.

I didn't realize, even a little bit, how bad Top Gun is?

Iceman/Val Kilmer: "I don't like you because you're dangerous."

Iceman/Val Kilmer: (SMILES AND TAKES A BIG BITE OUT OF THE AIR, which is really, really uncomfortable to watch)

I am so going to have this song stuck in my head all day now. Awesome.

think how stuck in your head it would be if you CHANGED YOUR RINGTONE to Danger Zone. Not that I've done that or anything.sss

OK- here's where things get cuh-reepy. Just yesterday both Rachel and Tristen were biting the air with their front teeth and remembering fondly how HOT it was when Iceman rocked the sizzle like so.....