I just got back from LA and was going to write about my time there. Instead I plunged into paralysis immediately upon returning to Ohio, due to the blizzard. IT'S MARCH.

My immediate reaction - IT'S NOT FAIR! - is immature and sniveling and I fought it since I'm not in kindergarten. But seriously, it's not fair. Like life, I know.

I returned earlier from LA in order to catch Jimmy and N.E.R.D. at Bogart's but the show was canceled and Jimmy's bus kept driving to St. Louis. This was right around when I crawled underneath five blankets, read an extraordinary book, Shantaram, (Thanks, Lindsay) and watched five episodes of The Office.

This isn't all that bad, I'm just out of synch. 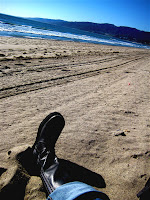 Last week I wore combat boots to the beach and got sand in all the wrong places because my California clothes still in storage. I got tattooed at Zulu Tattoo to cover up, I mean enhance, what the guy in New York did to my stomach and then apologized to Sunny.

I wouldn't be able to swim or get in the water during our upcoming Austin spring break. I promised to dangle my feet in the pool and run alongside the river while she tubed. As for the sun, I'd have to rig the bikini and cover my stomach.

"You need a tankini," she said.

I looked around unsuccessfully for a tankini but didn't have much luck. I sent Sunny a text: Tube tops are the answer. And thus, with a suitcase full of tube tops, I flew straight into Cincinnati's snow emergency.

Today, day two of the snow emergency, I threw off the five blankets and decided to get out of the basement. I found the knee-high woolly boots I'd left in the closet in January, the winter coat with fur-lined hood, and plunged into the drifts. With Sigur Ros in my ears, the walk to Hyde Park square felt vaguely Icelandic and ethereal. Definitely less suburban than usual.
Posted by ronckytonk at 2:28 PM