I don't have a wandering eye

Mary Beth sent a photo of me holding the mug we won at the pub quiz and I noticed that my eyes are MAYBE going in different directions. This made me think of someone who told me, like three times, that I have a WANDERING EYE.

He persisted, "Yes, one goes over there."

I just kind of felt that it would be SOMETHING I WOULD HAVE NOTICED. And if for some reason my eyes were too googly to focus in the mirror, I'd think someone would have told me by now.

"Dude," I thought, "I've known you for what, ten minutes? And I've been alive for 32-and-a-half years? And none of my friends, none of family, have mentioned to me that one of my eyes is fucked? That's unlikely."

THEN I see the photo of me and the mug and it's worrying. What if eyes start wandering in adulthood? What if my little bar trick of crossing one eye and staring straight out with the other one is sticking? What if my face just LIKES IT THAT WAY? I was sitting in the coffeeshop with these questions and I thought to capture my maybe-condition with the nifty Photo Booth program on my laptop. I thought I was being discreet but apparently was more absorbed by my task that I realized because I totally did not hear a man talking to me, asking if he could borrow my menu.

He, however, got a nice view of me staring long and hard into space and then me, startled, whipping my head around to talk and accidentally taking a photo at the same time. Which was not at all embarrassing. 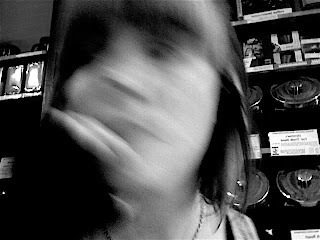 Hello. This post is likeable, and your blog is very interesting, congratulations :-). I will add in my blogroll =). If possible gives a last there on my blog, it is about the Notebook, I hope you enjoy. The address is http://notebooks-brasil.blogspot.com. A hug.

Wandering [Lazy] eyes are a major part of Marc Jacobs Summer line. Totally in fashion right now. You are ahead of the time.