Earlier this week Mary Beth invited me to a bar for dinner and a pub quiz. I was up for it but made sure to throw in a "Just so you know, I'm not very good at quizzes," since I'm still nursing a phobic fear of competitive games.

It seems that for all the time that I've spent in the world, I have absorbed very little. Sometimes I think highly of my brain and sometimes I'm convinced that it's made of cheesecloth and sea foam.

The 70's are excusable as I was too young to remember shit. The 80's? Too busy playing soccer and brushing My Little Pony's mane to pay attention. Plus, my parents' limits on television-watching crippled my references there. But at least I got to breathe all that FRESH AIR.

The 90's? I guess I have to start taking responsibility. I listened to Bob Marley, The Cure, Nine Inch Nails, and anyone from South Africa. I LOVED South Africa in the 90's. Once my mom grounded me by not letting me go hear Archbishop Desmond Tutu speak, a crushing blow at the time.

Besides that, don't bother asking. I rode my bicycle a lot and read about things that don't come up a lot on pub quizzes: Health care reform, herbs, chinese medicine, history of science, feminist theory. I was a hoot. I'm probably now at the apex of my general knowledge abilities and still only earning a C-. But when Mary Beth said we'd be playing with Jeremy and Matthew, I thought OH HEY NOW, bonus round on us, they're LIBRARIANS. 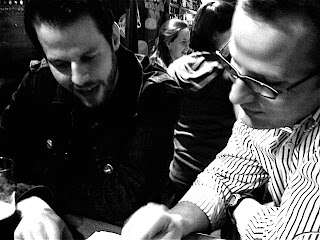 Here are the librarians, discussing the nuances of Black Sabbath lyrics. Or maybe the speed at which light travels. We were only off by about a million on that one.

The librarians are the first to point out that librarians are actually better at knowing how to FIND answers rather than just knowing them offhand. Not that they didn't do well or at least better than me, considering the only questions I scored for the team were on the Blarney Stone and Britney Spears. Someone sign me me up for Mensa, quick. I am a mental giant.

Whatever. Pub quizzes, like pool, are just a way to make drinking more interesting. You don't need to take the knowledge hype to the next level, unless you're Matthew.

Last night I was at Mary Beth and Jeremy's house and we got a text from Matthew, who was at a SPELLING BEE. Which, let's face it, rules. We briefly considered crashing the bee but Jeremy reminded us of the $30 entry fee just to watch. And while the fee included "heavy" appetizers, intriguing in and of itself, we were miserly and opted to send Matthew texts while watching America's Next Top Model. 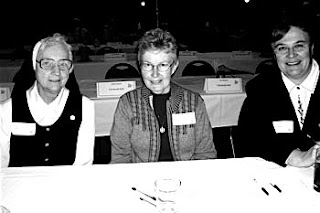 This is a photo from last year's spelling bee, where the competitors then, as now, raised money for a Northern Kentucky literacy program. Isn't that nice? Probably a lot nicer than drinking Bud Light and laughing at aspiring supermodels who look like they're going to vomit on the runway.
Posted by ronckytonk at 2:48 PM

I'm so excited! This is my first ever comment on a blog. So I guess I'm no longer a virgin so to speak. It seems appropriate that "my first time" is responding to a blog with the word "nerd" in the title.

Nevertheless, (always liked that three word word), I wanted to "share" a lasting impression of Jess, who, by the way, is one of the coolest kids I know (just so you know).

Here it is...
Running cross-country at the district meet at Princeton HS I yell "Go Jess!" ( I'm a really good motivator) and from the middle of the pack (sorry Jess) I see her look over her shoulder at me with a coy slight grin as if she knows something that none of the rest of us know.

who else could it be but me?

um could you define 'me' a little more clearly please? seriously. you've got me.

P.S. What part of "me" don't you understand?

the part associated with an identity