The thought just occurred to me that if I were ever in a situation where we had to pick a team for a pub quiz and I was staring at the floor, filling with dread because I KNEW I'd be picked last like in elementary school since the only way I can hit a volleyball is at top speed straight up to the gymnasium ceiling? Except now it's a pub quiz, not volleyball, so I have some equally hyper signature trait, like screaming E=MC2! every time a question is announced? 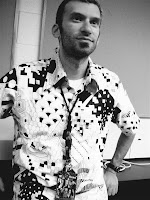 I would make sure I'm on a team with Andrew Sharp. You know, to balance things out.

I was drinking whiskey with Andrew after a Spice Girls show in January when he revealed that he is a former two-time champion of METRIC ESTIMATION.

I want to say that he was a world champion but I suspect that's inaccurate; I'm pretty sure it was a state-wide high school event that DID have "Olympics" attached to the title: Math Olympics, Science Olympics, Geek Olympics, something like that.

I scrawled in jagged, drunken whiskey handwriting in my notebook Metric Estimation! so that I wouldn't forget and then made sure the other promoters in the room heard the news, "Did you guys catch that?"

The promoters, all English, all cocked their eyebrows and answered drily, "Why are we not surpriiised?"

Andrew went on to explain another "Olympic event" that his team won: dropping an egg from however high and keeping it from breaking. Sounds straightforward, right? Wrong. The other teams did typical shit like dropped it on foam (boring!) but Andrew's team layered sheets of saran wrap with peanut butter, wowing judges and maybe spectators, too, if there were any. Anyway. I'm gonna go google metric estimation now.
Posted by ronckytonk at 10:47 AM