Jocardo and I stood in line outside Bogart's, waiting. It was 7pm, it was cold, it was dark.

"Doors were at seven, right?" I asked, putting my hands in my pockets and digging my elbows into my body.

"The good news," I pointed out, "Is that we don't LOOK old enough to be their parents."

But no amount of leather jacket (both of us) or hair bleach (me) or cute knit hat with bill cocked to the side (him) could prevent us from acting elderly.

"Someone needs to tell that girl to put a coat on, it's too cold for a tank top," we muttered back and forth, "Her mom let her leave the house like that?" Grumble etc.

Matthew found us and we went inside. We bought Guinness and parked ourselves at the back, right above the monitors, a few steps above the floor. Great view. We didn't know who was opening for Girl Talk but Jocardo thought it was a band with "death" in the name so we jumped to the incorrect conclusion that it would involve little white hardcore boys thrashing each other a mosh pit. 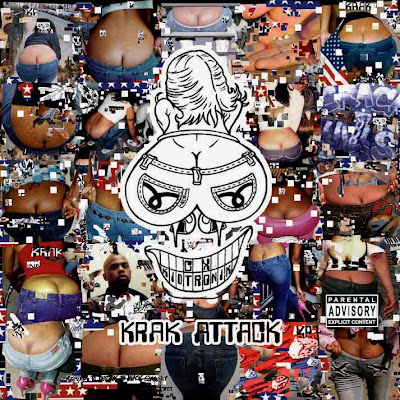 What really happened was this: CX Kidtronik took the stage and busted out some industrial-sounding factory-like screeching and gear-grinding noises. Which I don't mind, actually. That kind of intro can go in a lot of directions.

Tchaka Diallo, CX's sidekick and the other half of Krak Attack, made his entrance and the two men pounced around for a minute before exposing the theme of their set: BUTT CRACK.

One image after another of ladies' crack creeping out of their jeans flashed on the large screen. For emphasis, the photos were jiggled up and down because, you know, that's what butts do.

It was kind of funny and we were kind of laughing and making comments like, "Brooklyn is a much quieter place tonight without Krak Attack," and giggling when CX said stuff like, "Fuck you Cincinnati! Thanks for coming out!"

THEN he makes a request for ladies with lowrider jeans to join him on stage. I immediately and unconsciously start pulling my Lee jeans, which aren't lowriders but aren't exactly high-waisted either, up as high as they can go.

Soon several girls go onstage. Young girls, girls I could have parented. Girls I would have made put a coat on because it's cold out. "How old is she?" I think, "She looks 14!" And then a few more are up there. There's a line of them, all booty dancing as professionally as they can.

"Okay," I say, "I'm officially crotchety because this is making me uncomfortable."

Matthew and Jocardo turn away and hide their faces while the crowd closes in behind us.

People move forward, smiling, mouths hanging open, watching CX approach the girls and stick his hand into the backs of their pants as they wiggle and air-fuck harder and harder.

"Okay," I keep making proclamations, "Even if I hadn't gone to Evergreen and worked at the Feminist Press, this would disturb me. This is flat-out disturbing."

"People need to back up," Jocardo says of the crowd who keeps pushing into us for a better view of the stage.

"We've got the prime real estate here," I say.

"Well there's about to be some urban sprawl if these motherfuckers don't get off my ass," he replies.

His reply keeps me laughing just long enough to get me through the rest of the Krak Attack set.

Later I read in XLR8R magazine:

This is CX. He's a maniac, delivering 32 tracks of ass worship so freakin' nuts that it's pointless to compare it to almost anything. Make a list of the weirdest people in hip-hop, punk, and electronic music, put them in a blender, take those bloody body parts and sew 'em back together Frankenstein-style.

That sounds about right.

ps Girl Talk was pretty fun.
Posted by ronckytonk at 8:44 AM

No shout out for American Apparel? Dosen't her gold shiny skirt deserve a mention? LOL

Related: I tried to watch the MTV music awards this year but had to turn it off because I kept yelling "that man needs to PULL HIS PANTS UP" at the television.

And then I fell asleep with my teeth in a glass of water beside my bed.

oh no zan, you just reminded me that I seem to be grinding my teeth at night and now think I need a mouthpiece WHICH I COULD KEEP IN A GLASS OF WATER.