I've been ranting a lot lately so I thought I'd try to say something positive. Try.

I was impressed by the Creation Museum.

It was well thought out. Serious, serious money went into that place. I don't agree with what the museum is teaching but LORD, did the creationists do a slick job trying to convince me of their garbage.

Multi-millions went into it: planetarium, botanical gardens, full-sized theater, huge bookstore, Noah's Cafe, walking tour that takes two hours to go through. It was modeled off a classic natural history museum with statues and flags and big money exhibits. See, we're not provincial at all! kind of vibe. 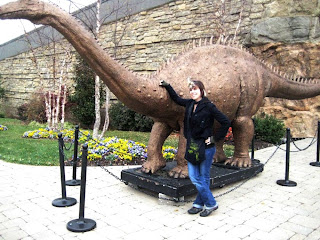 This dinosaur was supposedly created by God on Day Six, along with all other land animals including Adam and Eve. They all lived happily and perfectly together without strife until the whole serpent/apple/sin/Fall of Man issue.

I wondered if other people in the museum would cast me and Jocardo looks, if we'd reek of sin and stand out as non-believers. Actually, the museum employees were nice, like so nice you wanted them to chill out a little. The other visitors, however, they knew. We were getting so many head-to-toe check outs, I whispered to Jocardo through gritted teeth, without moving my lips, "I feel like I'm in a bar."

But like he pointed out to me before we went in, for all they know we're in a Christian rock band. No matter how different we look - even if I left my long skirt and hair piece bun bonnet thing at home and don't have eight kids yapping at my feet - we could be Christian rockers. Totally possible. 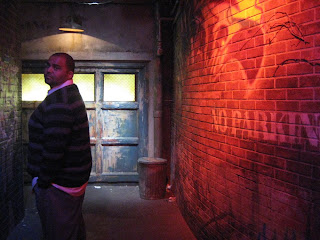 Here's Jocardo taking a stroll through the morality ghetto. Around the corner, spray painted on a few 2x4s it reads: modern world abandons the Bible, the message being that Scripture abandoned in the culture leads to relative morality, hopelessness, and meaninglessness. Everyone knows that garbage cans and graffiti symbolize a lack of ethics and that the suburbs are riddled with meaning.

After a few hours, Jocardo and I were exhausted, our personal spirituality suffocated. I'd digested the burrito I bought at Noah's Cafe and I was still pissed about the book I leafed through in the bookstore, the one Jocardo kept telling me to put down, the one about how feminism in the church is leading to a lack of obedience by women. Damn straight it is, you idiots.

And I'm so glad we went because that thing was the highlight of the afternoon. No matter how much the movie pretended to re-enact the Flood, we were not expecting the chairs in the theater to shake and actual water to squirt on us. From the ceiling? From the walls? I don't know! All I know is that it was really surprising and that it got in our eyes, a couple times, and that it felt good to laugh.

man, wish i'da known you were going... i'd have tagged along!

yeah it didn't even cross my mind to tell anyone else about our expensive ($22 admission!) religious field trip. next time?

You forgot to tell everybody how we had to be rushed to the hospital for muscle strain...in our eyes. We kept rolling them so much that we hurt ourselves!