Right before I moved home, I found the link to the Creation Museum. Gulp.

The Creation Museum website celebrates "creation, evolution, science, dinosaurs, family, and a Christian worldview". A pretty hefty mix if you ask me. The museum is 20 miles from Covington, KY where I'd be living and, according to the museum website, I should PREPARE TO BELIEVE.

Well, how about I pick a few beliefs off that list up there and ignore the rest? I love dinosaurs. Science is cool. Biology class was interesting.

I didn't want to make any assumptions. Assumptions like the museum discredits evolution. Batshit stuff like that. Even though the name Creation Museum pretty much says it all, I investigated. I clicked on "good news" and The Gospel of Jesus Christ popped up in my browser to provide helpful info on how the origin of the world is related to what a sinner I am.

Which would be discouraging -

AND, finally, as discouraging as seeing the sacrificial Lamb on the cross and the hope of redemption, all of which one can do at the Creation Museum up the road -

yes, it'd all be discouraging, if I were someone else.

But that sacrificial lamb-like redemptive hope doesn't really apply to me. My hope springs from an entirely different well. It's quite easy for me to disconnect the Bible and science. Just as I am able to separate church and state. I don't tangle up the threads of theology and philosophy and biology.

I was done getting all worked up about this until Halle's second Kentucky postcard challenge postcard arrived. You may remember that #1 did not make into my sinful fingers. It was too obscene with its f-word.

#2 (which I'll post photos of once I get the dang scanner to work) arrived! It's of a big dinosaur fighting with four little green dinosaurs and I mean they look like they're really going at it. On the back, Halle wrote: 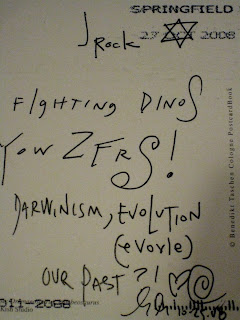 I'll give you three guesses as to how hard this made me laugh. Maybe my postal carrier isn't into the Cave of Sorrows, either.
Posted by ronckytonk at 4:45 PM

I really do want to go to the Creation Museum. What are you doing on Monday. And I'm not being sarcastic.

apparently I'm going to the museum with you. and then you can come home with me and get a DJ lesson (ps I almost wrote DJ lesion)