good clean fun, a first for both of us

I threw pumpkin in the trash yesterday and felt kind of bad because it had a face so it seemed mean and I had to reason with myself: It's not alive, it's not a person or an animal, it's a vegetable that's already been gutted and knifed. So seriously. Get over it.

Yet? Last week, I wouldn't let it in the house because it scared me. Again, how I've gotten this far through life = a mystery.

I like pumpkins when they've aged and look all elderly and in need of dentures. I think pumpkin is laughing at me, wheezing like an old man through his underbite. 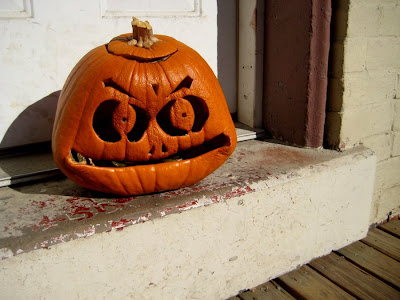 I picked out pumpkin at a patch on Rt. 8 where I went with SOMEONE who looks too cool for a pumpkin patch. We were a couple of the only adults there without kids. Just us and the girl in hooker boots who tripped around, hanging on her man's arm. 'Dang,' I thought, 'Why am I wearing Converse? Why didn't it occur to me to wear my 3 1/2 inch heels and thigh-high stockings? This is such a sexy atmosphere.' 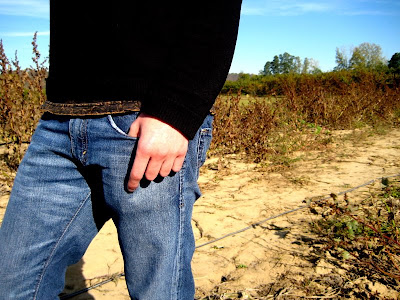 Anyway. We walked through the patch, which had been already largely ravaged - the superior pumpkins piled outside the barn - and made fun of all the sad, gray, and rotting pumpkins. I sat on a pumpkin and posed while a certain someone fixated on apple fritters.

'You've NEVER had an apple fritter?' He was horrified.

So I tried one and guess what? IT'S A DOUGHNUT. I've had doughnuts and I've had apples and now I've had them together so let the healing begin. 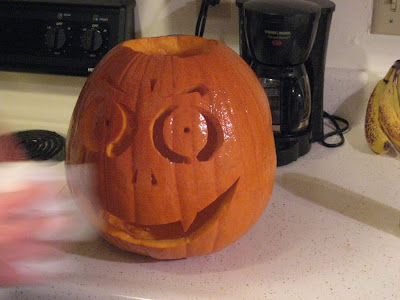 Besides the fritters, he was also into the carving. He'd never carved a pumpkin before. As a kid, he was allowed to just draw on the pumpkin with a black marker, I'm guessing because of safety and because pumpkin carving is a sloppy, messy pain in the ass.

As a parent, I'd happily turn to my kids, 'Halloween? I'm sorry, what? You want to dress up like everyone else? I'm sorry I can't hear you. Go do homework.'

I am more than happy to step aside on the carving because a) he's pretty comfortable with a knife, carries a switchblade on a regular basis, and, like, stuck a knife in a guy's leg who tried to steal his wallet yet has never stuck a knife in a stupid squash and b) whatever I carve would probably end badly like when Sara and I tried, six years ago, to carve a pumpkin with a cleft palate but it just looked real smirky.
Posted by ronckytonk at 9:21 AM

I thought old man denture pumpkin was intentional. Next year I'm gonna carve my pumpkin like a week in advance so it looks like an old man when all the hooligan kids come around trick or treating...not like I actually have a porch to put it out on, but whatever, minor detail.