Rock what you're wearing

I want to first put it out there that I am rocking my sweatpants, bandanna, and yesterday's shirt that I really need to change out of. None of that is rocking me. Secondly, Halle was featured in Berkshire Living! 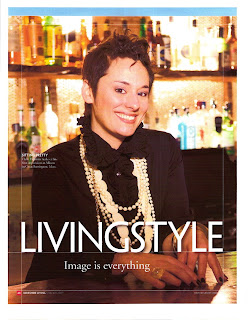 What does that caption say?

If image is everything, I'm screwed. Sometimes it's hard to wear anything but pajamas; it's the glory and pitfall of working from home. 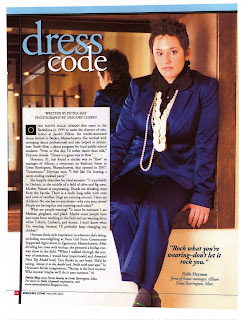 Anyway, a major theme of my friendship with Halle has been to think we met while restoring a salmon habitat!

Because at the Evergreen State College, new student orientations were hiking Mt. Rainier and crouching by rivers, doing something or other with sticks to help salmon swim back upstream to their native birthplaces. Not exactly the University of Minnesota freshman orientation I endured two years previous where I sat in a room with kids who cheerfully sang the Goldy the Gopher fight song at the top of their lungs while I quietly sank into depression.

Halle and I initially bonded on the Olympia riverbank over our Ohio heritage and later because we had friends, Renee and Jocardo, who worked in the same Cincinnati mall but, overall, because we both like silly shit. Every silly thing that has happened since 1996 has elicited our statement of gratitude to the salmon of greater Olympia, Washington.

What would our salmon make of Halle's style spread? 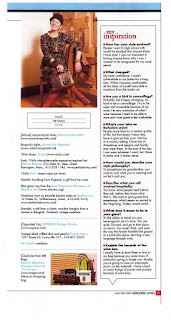 I love that Halle quotes her grandmother, "Rock what you're wearing - don't let it rock you" in the article. I remember her telling me at Evergreen that her grandmother said everyone should have a well-tailored well-made suit because it's classic. I probably stuck my hands in my overalls and twirled a bead on my hemp necklace and wondered what she was talking about. But now I get it and I know that Grandma's onto something.

Halle's onto something, too, with throwing herself overboard into whatever she does. She will think of something funny and she'll tell you about it or do a dance or she'll just cock her eyebrow and purse her lips and give you a look. Then she'll pick some tomatoes off a farm and you'll eat the whole box and wonder why you've never noticed such delicious tomatoes before.

Thank you, Halle. You are priceless.
Posted by ronckytonk at 6:02 PM