I wear my sunglasses at night

I thought my eye was cool but after mentioning that it was red and having a few people ask if I'm taking care of myself, I wondered briefly what it would be like to be blind and then went to the doctor.

This is a photo I took to prove to Halle that my eyes weren't bleeding: 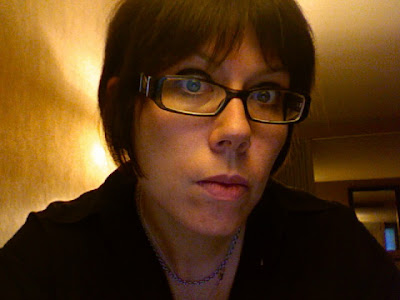 I have this nifty trick I do in these situations, a guilt-inducing thing I got from my mom. It started when I didn't want to wear a bicycle helmet and my mom's response was, "That's just what I need. Two children with brain damage."

Helmet on head. Well done, mom. You have traumatized me into being safe. Very effective.

I wouldn't care well for Neill in our old age if I'm blind. He'd have his caregivers and I'd have my seeing eye dog and we'd be a big old mess together. We'd be roommates with Clarence, his wheelchair-bound roommate who he's lived with for over ten years, and it'd be a party every day. Actually it'd probably be awesome.

Regardless, I went to LensCrafters.

And I have an infection! So now I'm putting in drops to fix that and I can't wear contacts for a week. Which is totally fine except for the sun so I had prescription sunglasses made, too.

And for those two hours while I had sunglasses but no glasses I became one of those PEOPLE WHO DON'T TAKE OFF THEIR SUNGLASSES INDOORS.

I hate those people. They are shady, literally.

This is a photo of me wearing my new prescription sunglasses indoors: 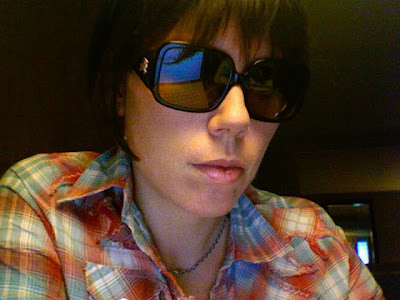 Is it just me or do I look like I need an attitude adjustment in this photo compared to the one at top? I swear, wearing sunglasses indoors will make you act like a jerk. It's weird.

You also have to be careful not to bump into walls, counters, and other people.
Posted by ronckytonk at 11:32 PM

Labels: are you f'in serious?, family

so last week my friend meg couldn't wear her contacts because she scratched her eye or something like that so she had to wear glasses. she also has rx sunglasses. she came over, we walked down to red hook, and when we were indoors, she realized she left her glasses at my apt. so she was the asshole who wore her sunglasses indoors. i was particularly amused when she walked into things. i felt like it served her right for being an indoor sunglasses wearer but then i felt bad because i realized that without the sunglasses she probably would have been even more blind. thankfully i am not that blind...yet.

1) when you spend money at LC, it helps me (in some way) to stay employed.

2) it is very important for people to remember that eye exams (at LC or *anywhere*) are not JUST a way for you to get glasses! i had a friend a few years back whose glaucoma was diagnosed by her regular gotta-get-new-glasses eye exam.

3) those sunglasses are awesome.

Now here's what I remember about the helmet discussion...When you turned 14,
which is a very cool age, you told me you didn't want to wear a helmet. I said, "If you won't wear a helmet, then you can't ride your bike". So your bike went unused until you graduated from high school. Upon graduation, instead of buying you a cool first car, you received a new bicycle (maybe you bought it yourself, I don't remember!) But I do remember buying you a cool, new helmet which I THINK you used in college and thereafter!
I don't deny doing the brain damage guilt trip on you (since I can't remember), but using the guilt technique never seemed to work so well with you so I have my doubts about your story!

HA! I will say this, she's got a pretty cool new helmet sitting next to her bicycle at home. Smiles.

P.S. Those new sunglasses are the hottness babe!

i love the glasses.
very victoria beckham.
but, you know, way cooler.
xx
b2

yo momma called you out!