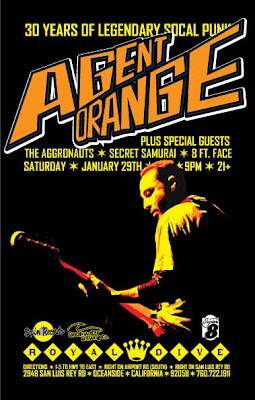 I must be in the mood for bar brawls right now because I was straight-up giddy after my first visit to the Royal Dive. A recommended local bar, the Royal Dive is off the well-lit path and tucked between a canyon and an industrial area. I'd gone out for sushi with Matthew and his friends from San Diego and we decided to check out the Royal Dive.

Agent Orange was playing. As in the punk band that started blowing tunes up when I was still regularly pooping my pants (1979). Before I veer too far into poserville, let me say that my past forays into hardcore music were not recent nor extensive but for some reason I was thrilled to pay the surprise $12 cover at the door. There were three opening bands, 8 Ft. Face, The Secret Samurai and The Aggronauts and before we heard them all and Agent Orange was on, there were several fights, two guys thrown out - one of them by headbutt - and my sandal feet were bathed in beer.

The best were the two guys who circled each other slowly, so slowly that the movement was barely discernible. They were like two gorillas at a slow dance if it were the kind of dance where you kill each other. I couldn't hear them but Matthew told me the conversation was along the lines of,

A bouncer came up behind me and warned that he might have to rush past me at any moment and it might get crazy. I told him that yeah, we'd noticed that. At one point one of the gorillas got bored or dizzy and peeled off to the sideline. The guy remaining fixed his jaundiced eye on Matthew and busted out some more nonsense like, "What would you do if I came lookin' for ya?"

"I don't think you will," Matthew said.

"Do you think I could kill you?"

Again, I couldn't hear what they were saying, I just knew that Matthew had his arms crossed, his legs planted wide, and was talking really, really calmly. I, on the other hand, was busy getting the giggles which in hindsight was fairly inappropriate given that the guy really did seem bananas. Eventually he got bored, left, and the music came back on. The bartenders were super friendly and most of the audience seemed so too.

Surf punk, I approve.
Posted by ronckytonk at 4:09 PM