I've been writing about Elise a lot lately. I hadn't hung hardcore with Elise before moving here but we knew each other in Cincinnati and I could tell she was awesome. Seriously, though, drive in a car with someone for about twenty times longer than you want to be in a car and get deliriously tired and low blood sugary and slaphappy and wake up grumpy and make up stupid jokes that really should never be repeated because they wouldn't be funny in any other context and you KNOW you're cool with someone.

Also, part of our road trip was a barter. We took Elise out here so she could visit a potential grad school and in exchange she gave us one of her original paintings, a self-portrait that we chose. We hung the painting over our couch so there's a big Elise on our wall. It's wonderfully creepy. I'm getting used to seeing her all the time but in those first few days sometimes I would talk to the painting, "Oh, hi Elise," and "Quit looking at me, Elise." Maybe one day I'll be lonely and I'll look up and think, "Naw, it's cool. Elise is here." 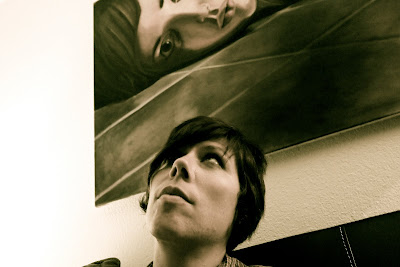 The painting itself is eerie. She is painted laying on the floor and I'm just not sure if painting Elise is okay. She looks like she might be tripping, over her own feet or on acid. But I was instantly drawn to it and it fits perfectly because we've inadvertently started collecting creepy art. Not on purpose, apparently that's just what we like. Andrew Morison thoughtfully sent us a housewarming present and it arrived today, an original print from a guy named Jeral Tidwell who is part of Crackhead Press in Louisville, KY. We took it to a framer and on the receipt, he called it Wicked Bunny. 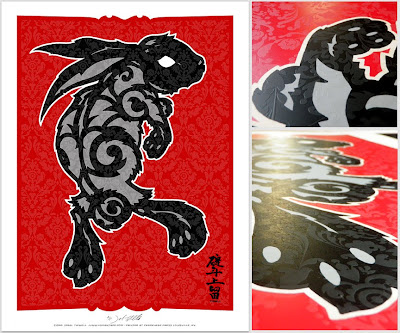 This will actually be the second wicked bunny print in the house, the first being a silk screen from a set of 20 that Evan made for the Rabbit Hole club's opening in Cincinnati. I loved this on sight and it's been hanging over my dresser ever since. 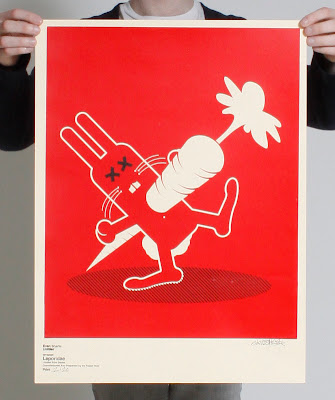 I tried hanging Evan's bunny in the living room for a day but it was too much paired with Elise. It felt aggressive, as if the walls were trying to tell me something I didn't want to hear, like the rug is fluffy and the sunlight is streaming in the windows but the apple cider in the fridge is cyanide. Then I put the Evan bunny back over the dresser, hung some inoffensive figure drawings that I bought at an estate sale in Oxford, OH and peace and balance was restored. Why has HGTV not hired me yet? I totally have a niche.
Posted by ronckytonk at 9:21 PM

Hmm, Creepy art.
I guess that explains why you're about the only person who has ever shown a liking for my "Stonehenge Solstice."

okay Jimbeau, I thought I knew who you were but Stonehenge Solstice is making me wonder now

Methinks you were correct. Go here:

Are you trying to say that the Drury joke really isn't funny? It's also a university apparently. Hmmm??

I'm glad to be hanging out in your apartment btw. Forever immortalized as that girl that might be dead, sleepy, high, etc. You have a beautifully, creepy collection.

Elise, yes, that's exactly what I'm saying. Every time we said Druuuuury and then lost it, someone looked at us funny (Teef).