The study of stuff

Okay, after this I'm really going to try to stop talking about stuff I own. GOD. It's just that the turn I took down creepy art road a few days ago really got me looking around and wondering why I like what I like and keep what I have. Sometimes it's easy to pinpoint. My monkey statue is a good example of that.

In the summer of 2009 I went to Graceland for the first time. I hadn't thought about Elvis a whole lot before then but I walked out of his house entranced. This in and of itself is not unusual for me; I'm often waaaay behind the curve. I was working for Crystal Bowersox in December when she opened a show for the Doobie Brothers. I'd devoted less than five minutes of attention to the Doobies in my 35 years but after I saw them onstage being so pro and backstage being so gracious I was all, "Have you heard of these guys?!? They're called the Doobie Brothers! Wow!" Turns out I was familiar with about 20 of their songs simply from existing on the planet Earth, I just didn't know it.

Elvis got me with his monkey statue, among other things. 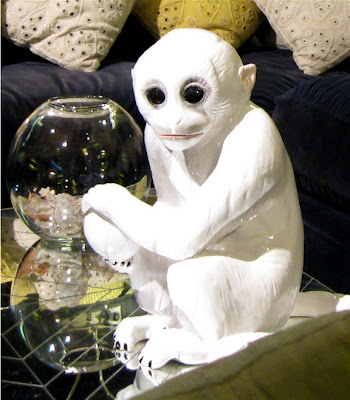 I got home and wanted my own monkey statue. I kept my eye out and eventually, believe it or not, a monkey statue popped up on Craigslist. I drove 30-odd miles to buy the statue from a lady who also talked me into buying its companion piece, the monkey lamp, not pictured here because it's unspeakably ugly. I keep it out of sheer stubbornness. 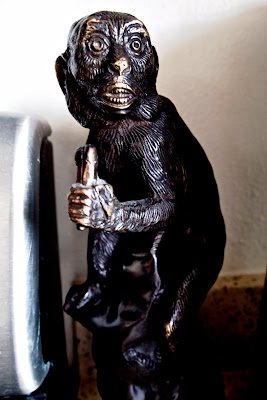 In our old home, the monkey statue was displayed atop a bookcase in the studio-office. At night, when I was awake and up late reading, the recessed lights from the sharp-angled ceiling would catch the monkey statue and project its elongated shadow on the wall. In all seriousness, a few times I was afraid of the monkey statue. In the new home, the monkey is nestled between the stove and the coffeemaker and it's not spooky at all. Once I even balanced the monkey on the lid of a saucepot in which I was cooking rice in order to keep the steam from escaping. After a minute I decided that wasn't a good idea, put the monkey back on the counter, and found a lid that fit better.

This guy I bought on the street in Mexico in 1995. 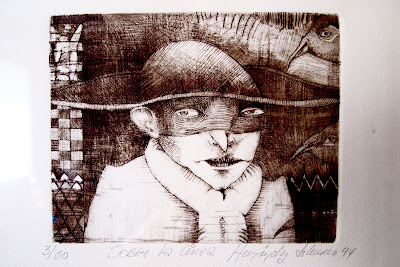 I love this etching: the birds on the right, his shifty eyes and pointed beaky nose. He's crisscrossed the country with me and hung in most of my rooms. Now he's installed above the bed and keeps a mysterious eye on me.

Finally, I offer these two ceramic plates. I'm not sure what they're supposed to be for. To put hot dishes on? I just look at them. I bought them at the Necromance store in Los Angeles. 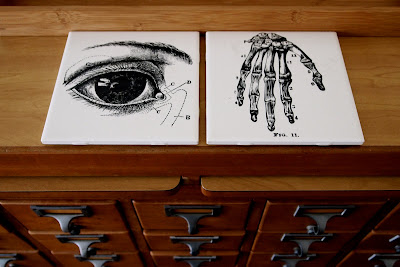 The anatomical plates sit on the library card catalog, another secondhand purchase, that serves as our bar. Usually a slew of liquor bottles are also on the card catalog but before we moved to California, I gave away most of the booze. Anyone who came to our house during our last week in Kentucky was given offers. What do you want? A desk? A floor lamp? A bottle of vodka? Have you ever tried coffee-flavored Patrón? It's yours. I don't have a clear-cut reason why I have the plates with the eyeball and bones, I just do. I always liked biology. The study of life is fascinating.
Posted by ronckytonk at 9:51 PM

My name is Robb and just found your blog post about the bronze monkey statue. I just found the same one at an indoor flea market in Fort Collins, CO. Any idea on where they are from, value, or how old? It was just odd enough that I had to have it. I was looking for info and found your post. Thanks

Hey Robb, I have no idea on the story of the monkey statue. I bought mine from a woman north of Cincinnati and have never seen another like it...but am happy to hear he has a twin in Colorado!