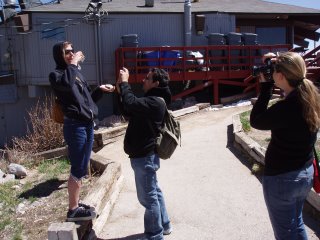 If you ever worry that technology is turning us all into a bunch of self-absorbed documentarians obsessed with ourselves, this photo may convince you further that you are correct.

While all of this rampant photo-of-a-photo business was taking place, we were surrounded by a most vast expanse of nature.

Rising from the depths of an expensive housing development in Albuquerque is the Cibola National Forest and the world's longest aerial tramway which carried us up 3,819 feet and 2.7 miles to a spot in sharp contrast to the dank underbellies of theaters, fluorescent-lit dressing rooms, and exhaust-scented loading docks. There, amidst the Douglas fir, the spruce, aspen, and pine, the 1350 million year old granite and the 250 million year old limestone and shale, we noticed:

Posted by ronckytonk at 7:47 PM

Hi ms Jasmine. Im Mykele callicutt, a student of ms. Neater's class that u met i think last year. If u can vaugly remember im a starving aspiring writer that u read and gave some great critisicm to. I still really appriciate that also too. Anyway i love yor site and your blogs. Your writing is so fluent and wounderful to me. It reminds me of a smoother version of mines. Anyway i learned that we are both pisces and we both like degrassi and.... we both write. Sounds like the formula for a good frienship in my book lol. OOPS! iM BEING TO CHATTY AGAIN...... Well ill keep checkin your page reading on your journey and witty banter and i hope everything goes well for u. o and my email is mykele14@yahoo.com if u ever get some spare time email me . so good luck!

hey b:
i don't know why mykele is calling you ms. jasmine. he's a kook.

one day we will talk and it will be good. the craziest shits has been going down around here... i am jsut day dreaming about relaxing in the lone star state with you.
xx
b2

Anonymous said...
This comment has been removed by a blog administrator.
9:44 PM

Anonymous said...
This comment has been removed by a blog administrator.
12:28 AM

Anonymous said...
This comment has been removed by a blog administrator.
12:34 AM

Anonymous said...
This comment has been removed by a blog administrator.
9:16 AM

Maybe the best post that I have read this month :D