Last weekend, after fetching N from the garden and preparing to leave the Hess-Schumacher home, I asked where I could buy beer in the neighborhood.

Hal told me there was a corner store three blocks away and added: 'We had a murder there last week.'

I nodded evenly and thought: SWEET. Hal told me that it was the store's first murder. It's not like THE spot to go get murdered or anything.

I drove to the store, ignored the cop car in the parking lot, ignored the kids hollering at each other, ignored the ramble-eyed man standing in the middle of the store muttering and cussing to no one in particular, and perused the beer fridge. And then I saw it. The beer of my youth.

The soft, glowy image I have of Wiedemann has everything to do with my personal associations with the brand and nothing to do with the piss-thin barely-beer taste of the brew. Which I care for deeply.

One month after graduating from high school I moved into a house with seven strangers. We were interns who officially rehabbed abandoned buildings for a low-income housing co-op and who unofficially cracked jokes, drank beer, and made merry.

It was kind of like a Real World series except that we were in the ghetto. And no one was filming. And our building may not have been up to code. We didn't have a tricked-out pad like MTV's Real Worlders. The building we lived in on 14th Street had A LOT of character, though. A SHITPILE OF CHARACTER.

We had three floors, giant windows, old fireplaces, a toilet that flushed, and an indefinite quantity of roaches which persisted in darting in and out of our belongings no matter how many times we bombed the house and left for three hours to let them stagger around, drunk on poisonous fumes, until collapsing and dying.

We had a hatch to the roof which we lifted by standing on the stove whose oven door was kept shut by a log propped against it. We had parties on the roof and slept on the roof in sleeping bags and once in a tent. We had an eight-track player and the Easy Rider soundtrack on vinyl. And we had a plastic Wiedemann sign hanging on the kitchen wall.

I was the youngest member of the household that first summer and one of the others asked me when I moved in if I liked beer. 'No,' I answered honestly. 'Oh, well, you can't be an intern then,' he said, 'Interns have to like beer.'

And so I made the necessary adjustment. I wasn't about to lose an opportunity to learn more about the city's grievous housing policies while gaining valuable community-organizing experience. I would learn to like beer.

George Wiedemann (b. 1833) came to America from Germany as a young man and founded his brewery in Newport, Kentucky, across the river from Cincinnati. By 1889, the Wiedemann Co. was not only in business but was kicking ass and, possibly, taking names.

George had two sons, George Jr. and Charles, and a grandson, Carl, who all took turns running the business.

They guys had some legal issues since they weren't exactly DOWN with Prohibition and faced tens of thousands of dollars in fines and impending jail time. Charles actually died while awaiting trial (NOT a happy time), so it was up to Carl to continue the family tradition of getting people drunk, regardless of that silly 18th Amendment.

With the passage of the 21st Amendment (1933), the Wiedemann Brewing Company was reopened.

When I was slurping down my first Wiedemann, it was made in Evansville, Indiana. It is now owned by the Pittsburgh Brewing Company and shipped to Louisville, Cincinnati, and southern Indiana. And though no longer local, it is a homeland institution I still honor with grave respect.

(Not unlike the regard I hold for the annual yell-off between Kentuckians and Ohioans before the Riverfest fireworks on Labor Day. Broadcast on the radio by WEBN's Eddie Fingers, several hundred thousand people scream on command and try to put the other state to shame. Best case scenario: standing on a deck overlooking the river with Wiedemann in one hand, bratwurst in the other, screaming my brains out. And beating Kentucky) 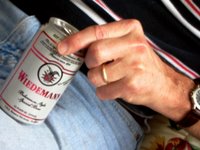 Last weekend, I took the six-pack of Wiedemann I bought from the corner store to my cousins' barbeque. I immediately went down to the basement where the menfolk were watching the horse races on television and handed a can to my uncle Paul.

Did I say that? I can't remember, I was probably drunk.

funny you mention the old weideys. it was derek sands that got me hooked on them. Marty just ran into derek and sarah in DC. Small planet.

no actually it was mike (not stehlin, the other mike) who asked me if i like beer and basically threatened to have me kicked out. and i totally forgot about rolling the bottles off the roof. and we were there for 'neighborhood improvement'? heh.