CG Ryche, percussionist, walked into wardrobe before Friday's show in Ft. Lauderdale looking for someone to tie his hair into a ponytail. In the process of getting his hair tied back he also gave me an archery lesson. He saw the archery kit on Renee's altar, was informed of my utter incompetence, and offered to help.

After showing off his form and skill which resulted in a satisfying thwack of the arrow's suction cup affixing to the mirror, he handed me the bow and arrow. 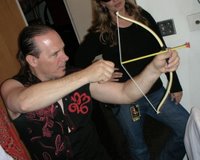 An admission that I should make here is that I hate being bad at stuff. I recoil from board games and any entertainment that ends with clear winners and losers. I prefer solitary sports in which I'm competing against myself. I can't stand charades but I'd probably really like fishing.

I grew up playing soccer but when I joined a indoor league in New York last year, I was nauseous with nerves. Swimming lessons made me sad because I didn't know how to swim already. Once I learned to swim and joined the team, I gave pep talks to my teammates behind the starting block before every relay about how IT DOESN'T MATTER WHO WINS OR LOSES. JUST HAVE FUN! Same thing for high school track relays.

As for archery, I think it's the sort of thing that one learns at camp and I don't even want to get started on that subject. I suffered once through Girl Scout camp and I was probably crying in my bunk because I missed my mom while everyone else was out in the field learning archery. 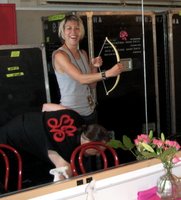 Here you will notice that CG is picking an arrow up off my foot where it has, again, fallen limply to the ground rather than doing anything remotely arrow-like. Please also notice that I'm being a good sport by laughing my head off and not a pain in the ass by getting mad like my mom said I did when I was little.

I eventually managed to make the arrow move slightly more forward than downward and that was enough for us all to call it quits.
Posted by ronckytonk at 4:21 PM