Tim is from Jeffersonville, Indiana. I know Tim as the video guy, or LED Wall Technician, and honorary wardrobe girl since he was no stranger to a sewing machine.

I appreciated Tim for a couple of reasons: he didn't mind when I wouldn't tell him who drew on his sneakers while he was asleep, he once gave me a high five after I said, "Oh for pete's sake, Tim!" just because he likes that expression, and he was kicked out of his high school band for laughing.

As someone who irritated A LOT OF PEOPLE on the high school track team by laughing, I'd like to give Tim a shout for actually getting booted.

Tim is married to his high school sweetheart with whom he used to work at Domino's Pizza. Tim's future wife was the girl on the phone who said, "Thank you for calling Domino's. Can I take your order?" and Tim was the delivery guy who showed up at the door.

"No," he replied, "I never worked at Hardee's or Long John Silver."

And that's Tim: exacting. He has a ridiculous penchant for details, a boundless number of facts crammed into his head and he's not afraid to share. Tim's wife gave up Domino's to become an RN and she is currently pursuing her Doctorate in Nursing Education. Since his checkered fast food past, Tim has studied and worked in video - for a local news station, for corporate gigs, as a roadie, and for one year in the FBI.

I asked Tim what he did for the FBI and he gave me his favorite answer to that question - "STUFF" - which didn't really fly with me so he confessed that he did top secret two-way video conferencing.

I asked him what it takes to earn an FBI file, does he think I've earned an FBI file based on my own checkered past that I quickly outlined, and how I can get a copy of my FBI file.

Tim told me that the FBI can dodge, delay, and refuse to give up files for years on end and that I most likely DO have a file and have been photographed but have probably been identified as more of a loiterer, not a PLAYER. And I can't decide whether to feel proud, relieved, or offended by that. 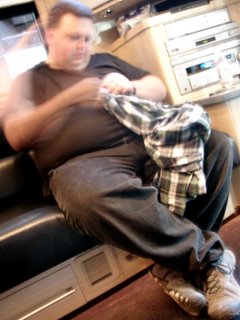 Here's Tim deftly using a needle and thread to fix his pajamas.

Thank you, Tim.
Posted by ronckytonk at 5:40 PM