das Reinheitsgebot? Yeah, you heard me.

The Bavarian Purity Law of 1516 is the oldest still-valid beverage law in the world. It allows only the use of malt, water, and hops for producing beer and its name in German is a mouthful - das Reinheitsgebot - as German names tend to be.

Why do people always say that Germans have no sense of humor? Just think about how much energy they must exert just to keep a straight face while saying half the shit on their minds using those silly words. I believe their sense of humor went underground long, long ago.

Mary Beth and Jeremy recently invited me to their house to discuss the Bavarian Purity Law and get drunk on the porch. Actually what MB said was: 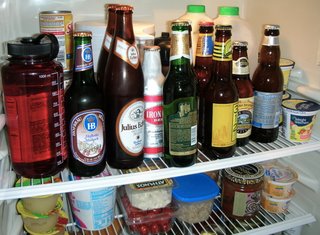 I showed up at the appointed time and within minutes was peering into the fridge, the fridge which proves that YES, WE ARE RELATED.

I didn't know anything about Hofbrau Maibock but it didn't take long to pick up on two things: 1) YUM and 2) I was on a fast track from sober to wasted.

By beer two I'd already hit wobbly and ventured to Jeremy, "Maybe I'm imagining it or maybe Bud Light has made me a wimp...but...DAMN."

He nodded sagely, "It's the Maibock."

Maibock is tapped in Munich's Hofbrauhaus in the last week of April for its yearly May debut. America's first authentic Hofbrauhaus is in Newport, KY and you can go there and drink Maibock in the bier garden while scarfing Bavarian food with the Cincinnati skyline as backdrop.

DOES IT GET BETTER THAN THAT? Well, maybe.
Posted by ronckytonk at 6:48 AM

I am beside myself with laughter everytime I think about the events of that night! The Maibock actually blocked my memory of the "spy" photograph until your post!

we have to do it again before you leave :(

I had no idea how many sites i'd find on this subject. Seems a little odd but i'm glad. here's mine -> brass fenders