The tour went to Manchester after a month in London and soon we'll be in Boston. My spirits were cloudy those last few days in London; I didn't want to go. I'd gotten comfortable in my routines. Every morning I walked through the lobby and across the street to buy coffee at Costa.

"A large white for the lady," the cashier would say when I entered. I was a regular and they knew what I drink. I had two pounds twenty pence counted out already. I talked to the guy who made the coffee and told him that I was returning to the States.

We talked more and I listened hard to understand his broken English. He told me he was taking time off from work but I couldn't make out whether it was for eye surgery or a beach vacation.

I'd put on my headphones, sit across the from the Liverpool Street station and watch people exit the trains and tube. Our hotel was in the city center, the financial district, and almost everyone wore a black wool coat. Sometimes they wore grey. Sprinkled in with the lawyers and bankers were backpackers and bike couriers. 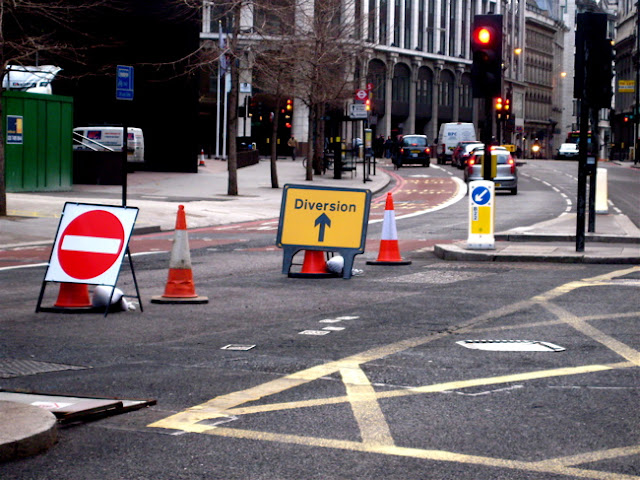 I'd carry my coffee back to my room, turn on the computer and prepare for the day. Breakfast was included in the bill and I'd call room service and order an omelette and fruit. Joanna stayed over once and we went to the restaurant downstairs which reminded us of the Titanic with its domed ceiling, pillars, and white tablecloths. We polished off full, meaty, bloody English breakfasts, and whispered to each other, embarrassed over being waited on officiously by a team of Eastern European women.

The week Charlie was with me, we CASHED IN. We tested the limit part of their unlimited breakfast: tea, coffee, waffles with fruit compote, toast, eggs, omelette, muesli, soy milk, fruit, yogurt, AND a pastry selection. What we didn't eat in the morning, we shoved in the mini-fridge for later.

In the early afternoon, Mario or his father Dmitri picked our group of band and dancers and management up in a mini-coach and the rest of the day was spent at the O2 arena. Some of the crew grumbled about being in one arena for so long but I liked it. I liked knowing that one of the local security had been a Polish exchange student to the University of Cincinnati. I found that another was obsessed with meteorology and that if I was going to carelessly comment on the weather, I'd better have a lawn chair and a cigarette in my pocket. I liked to stand outside and see the same green laser slice through the night sky, a marker of time, Greenwich Mean Time.

I liked that once, at 3:30 AM, while walking home from Club Aquarium, a fox crossed the deserted street in front of me. I ate chocolate in bed at night and read. I pictured Heinrich Harrar's Tibet and Paul Theroux's train travels and crumbs fell on my shirt. Before falling asleep, I'd shake it out over the rubbish bin. I mean trash can.

Oh yeah, that. A few times I thought the following words: bloke, wanker, jumper. I may have "reckoned" a thing or two. One day I said "mate". "Oh yeah, they're mates," I told Joanna without thinking. I guess I'm going to have to let people off the hook more. I always thought it sounded pretentious when Americans use British vernacular, like they're trying too hard. When maybe a place had just gotten into them and under their skin.
Posted by ronckytonk at 8:11 AM