The first time I went on a hair odyssey was in New York. I was tired of having straggly, stringy hair down my back and wanted a short cut. I chose seven photos of different boys in a Japanese fashion magazine, brought them to a stylist in Williamsburg and asked him to create a haircut based on those boys.

Earlier that day, I'd been hanging out with Michael Bova who invited me to lunch with his friends. I declined because I had to go thrifting; I needed clothes to match my future as a Japanese boy. He shrugged, "Just meet us later for a drink."

When I walked in the Metropolitan that night with short hairs of different lengths going in all directions and a brand-new-to-me Adidas hoodie, Bova laughed, "You totally did it." I curtsied.

A week ago, I was drinking Guinness in East London with Charlie, Antony, and Anna. Antony and Anna, both hairdressers, started arguing about how they'd cut my hair. They grabbed my chin and and the crown of my head and moved me around like a mannequin while shooting back and forth, "No, no, I wouldn't do that, she doesn't want that! I'd do this!"

I, meanwhile, caught Charlie's eye between the hands gripping my face and he offered the futile suggestion that they ask her/me what I want. That didn't happen. No, Antony told me that he had a vision and that I should trust him.

When I showed up to Antony's salon yesterday and sat in the chair he told me his idea again. "That's great," I said, "Except I don't really like heavy, blunt bangs." He stood behind me and looked silently in the mirror. There was no menace in his stare but I could hear him thinking really hard. "We'll talk about it later," he said.

Later, he asked me in his soft voice what I had in mind and I caved. "I'm letting go," I said and threw my arms out from underneath the smock, "I've LET go. It's your vision and I'm bored. Knock yourself out." 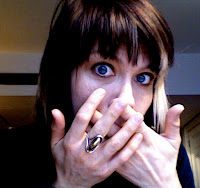 After the first horizontal slash he did above my eyebrows, he stepped aside and asked what I thought. "I'm...INTERESTED...in what's happening," I said.

By the time he was done and we were walking down the street, however, I was on a new hair high. "It's much more you," he said. I thought that was funny and sweet since it was only the third or fourth time we'd met but I agreed that it felt much better than the growing out dishwater blond thing.

"You're right," I said, "I'm not identifying as a California blond." "You don't seem like a California girl," he said. "I'm not," I said, "And now my hair reflects that. You have given me my head of the future."

Lindsay text messaged and asked about the hair. I told her that a) I was a punk rock Katie Holmes minus her face and in case that wasn't totally clear I added that b) I was all bangs all the time and looked like c) a German Scientologist. 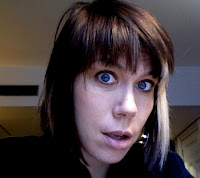 Which I didn't know I was going for. But THAT? That is what a hair odyssey is about.
Posted by ronckytonk at 3:24 PM

I love the dark brown, and I don't like bangs in general but I think they look good on you.

I just had a flashback of a hair odyssey from a number of years ago: me and you standing in the kitchen of 211 and me putting red streaks in your hair. I know I have a picture of it but I can't find it.

oh the carnage. thank god you can't find that photo.

somehow we still have the same haircut as each other... a couple of days ago i made an appointment at hair school to turn my hair extra dark, too... now, just for a streak and wonder twin powers, activate. if we could just do something so i could twin you on the height, i'd be so in business... i need to get one of those medieval stretching tables.
looks good, b.
love
b2