Matthew told me that Nerds are his favorite candy and I wasn't surprised. A nerd WOULD like Nerds. It's called identifying.

THEN? He discovered Giant Chewy Nerds in a gas station and HOLY F**K OMG EXPLETIVE.

I don't even like candy that much and I freaked over these things. We sat on the couch, each with a bag of GCNs, popping them in our mouths, exchanging wild-eye glances. Cursing.

I'm not even going to talk about what happened when we found doubles, the conjoined twins of Giant Chewy Nerds. It's too embarrassing.

The next time we bought them, I read the label. They're jelly beans encased in a hard, bumpy, crunchy Nerd shell. Why, exactly, that makes them so crackish, I don't know but they won an award. A very important candy award. 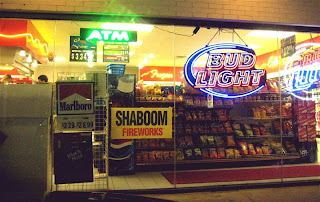 This is the gas station in Ft. Mitchell, Kentucky where the cashier busted us buying late-night Nerds two days in a row.

He said something to Matthew like, 'Back for more, huh?'

Who replied, 'They're Nerd jelly beans!'

As if THAT. EXPLAINS. EVERYTHING.

I've now resolved to ask the runner in every city on the Idol tour to find Giant Chewy Nerds for the bus. Because that won't take up valuable time at all.
Posted by ronckytonk at 7:19 PM

goot that they have that neon sign for "a** to mouth".

you can get *anything* at the convenience store!

"valuable time", meaning the time you usually ask the runner to get soy crisps? like that kind of valuable?

i'm off to find some valuable time in the north woods. if you don't here from me for more than a week assume it's turned out like the shining...