I took a walk my first day back in LA. I went to a park in West Hollywood and sat on a concrete picnic table. I watched Latino kids play soccer and made some phone calls and realized that I was tired. Three hours time difference plus no sleep the night before tired. Make a pillow out of empty Cheetos bags and cigarette boxes and curl up under the concrete table tired. I walked back to the hotel.

Something funny happened on the way. I was so delirious I barely remember what but I think it was poodle-related. I just know that I saw something funny and I shared a high-beamed smile with some stranger who saw it too. I kept laughing so I giggled at other strangers as I passed them on the sidewalk. And I thought to myself that I was acting as I did in Berlin when I spent hours every day walking and laughing with people I would never know or see again.

The next day I got my rental car and I drove to rehearsals thinking THIS IS SWEET. Driving through Laurel Canyon, I noticed how pretty the trees and flowers were and how the Rav4 had nice pickup and took the curves in the road.

"I am a hypocrite," I thought, "Because I am digging this."

Good luck, Earth. Goodbye, fossil fuels. So sorry, future generations. Didn't I say that when I get tired of cycling and public transport and walking, I'll get a veggie oil car or a hybrid or an electric or something that makes me feel like less of an ass? Because what I MEANT was that I'll get an SUV. Or a Hummer! Maybe a Hummer limousine like the one I just saw, the one that blocked the entire intersection when it took a left. I tried to count the wheels on the Hummer limo when it crept past me like a giant white monster centipede - I think I saw 12. 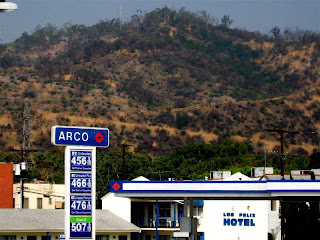 On the radio, 98.7 FM was giving away gas to listeners.

"Congratulations! You are winner of three months worth of gas!" Yelled the DJ.

"Oh my goodness! Wow!" The winner sounded overjoyed, "Thank you!"

"That's such a LA thing to give away," I thought disdainfully.

Again with the hypocrisy; I was getting my gas costs reimbursed by work and thus wasn't jealous of the radio winners. But my personal conflict - eco-ideals vs. apathy - was pretty much over by the time I got home that first day driving.

It took me two hours to drive 20 miles that day. I wasn't so much noting the bright purple flowers by the end of those two hours as much as the fact that I'd called three people assholes, one guy a fucking dick, asked some lady to get off my ass, and told one bitch to step on it. I'd also given two people the finger but in my special secret way which is to hold it low, down by my leg. I hold it there for awhile, for like ten seconds, and no one knows I'm doing it but for whatever reason it makes me feel really good.

So much for walking around, taking my time, giggling uncontrollably, smiling.
Posted by ronckytonk at 3:24 PM