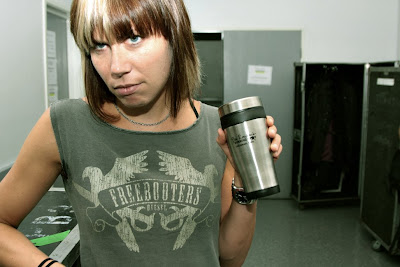 I took this photo to show off my Bob Roncker's Running Spot / Cincinnati, Ohio travel mug.

Too bad I can't tear my eyes off the sweat pouring out of my right armpit long enough to read the fine print. Also of note is the large vein curling around my left arm like an over-sized earthworm.

In this photo you can't even see my left armpit whose sweat ring, I'll just tell you, is about four inches more impressive than rightie. Nice.

I'd just arrived at the rehearsal studio when this photo was taken. I parked and walked outside for MAYBE 45 seconds. I didn't realize how my sweat glands had reacted and began waving at band members across the studio and guilelessly subjecting them to my slimy hugs.

I thought last week's heatstroke episode which demanded immediate attention (drinking cocktails with Mandy) and general sauna-like weather of Ohio made me impervious to the heat. Besides, they keep saying it's a DRY HEAT here in LA.

By the end of the day, I felt I owed an apology to Geoff, with whom I was sharing a small office and whose nose was potentially within reach of my pits. He didn't care. He was distracted by accidentally cutting himself with either the knife or scissors - he was holding both when he began yelling and hopping around so it was hard to tell which - and by spilling coffee all over his suitcase and floor. Apparently we are both a mess.

Because I'm a helpful assistant, I handed him napkins and mocked him while he put on a pirate bandaid and dabbed coffee off important tax forms.

Side Story: My nickname with Sara and Michael, who appear to be on some sort of honeymoon in this photo, is Pita. Pita is short for Pupusita and refers to a San Francisco afternoon many years ago in which I plowed through my weight in Salvadoran pupusas. I later found out that pupusita, in El Salvador, is slang for vagina. Literally, little vagina. WOW.

Pupusita has since been officially mended to Pita but for awhile Sara was trying to come up with alternatives. She tried once to call me Pit Stain and I wasn't having it. Now she often calls me Pitsie and not only is that fine but it's apparently appropriate.

Photo credit: M. Sperling
Posted by ronckytonk at 9:32 AM