Last Sunday my brother had on a shirt that said THE UNSTOPPABLE LEGEND. Which I thought was perfect.

People have always asked me what it was like to grow up with a retarded brother. Did I feel left out? And did I get enough attention? And did I feel different from other kids? And was it hard?

And I get where those questions are coming from but, "Huh?"

Neill is severely mentally disabled from a sweet combo package of bad inoculations, epilepsy, and meningitis – thanks, universe! – but as a brother, he's all I know.

There are kids born addicted to alcohol and crack, kids born into families with chauffeurs and nannies and yachts, kids who get shot on the way to school, kids who think everyone has a two-car garage and white picket fence.

They all think their world is THE world. The whole social fabric comparison happens later. Perspective is acquired. 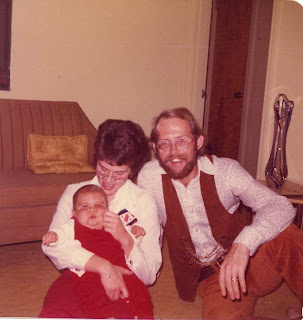 By the way, dad, nice vest. I don't know if I've told you that lately. How do you keep those gold chains so nice and shiny?

Here my mom is squeezing Neill's cheek which is all puffed up on steroids. When I see super fat baby Neill photos, I laugh and think it's cute. But my mom moans, "Awww," sadly, because she remembers what it was like to have a sick baby.

My parents - not me - went through the shock and heartache of their baby's developing problems. They moved back to Ohio from California and got busy with support groups and learning as much as they could so that they were dealing by the time I showed up two years later like, "Okay, let's DO this!"

I've only seen one photo of me that betrays any sadness or confusion about our family. It's Halloween, I'm one-and-a-half years old, and I'm wearing a bunny suit.

I do NOT look happy. My parents had just realized that Neill was running a 108 degree fever and was blind. He regained his sight, so again, thanks universe, and this time I'm not being sarcastic. That was nice of you to let him see again.

They dumped me at Mema and Papa's house and rushed to the hospital. Clearly I know something is up. Something, somewhere, is SUCKING. My bunny ears are drooping. 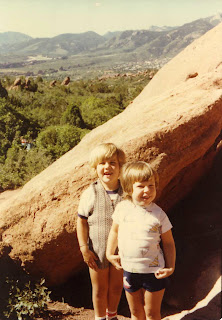 But most photos of us are like this, fat and happy.

It wasn't that big of a deal. We fought and I hit him and he bit me and I cried. We went to nursery school and watched TV and took swimming lessons and went to family fun night at Stepping Stones. We were friends with other families who had disabled kids and sometimes went on vacations together.

Not that I didn't get embarrassed. My cheeks burned when he got tired of mass and stood up in the pew and shouted, "No!" Or decided to make animal noises. That was always fun. But it had always been like that so in some ways, it was normal. We both got plenty of attention.

I should point out something, though. It could have been very different.

My parents were fiercely determined to keep Neill actively in the world. He went to camp and took horseback riding lessons. He played on a t-ball team for disabled kids which was a FUNNY game to watch. We both went to the pool and to church youth group.

If Neill had been born in an earlier decade, there would've been more pressure from doctors to put him in an institution. He could have been hidden away like a family taboo. But in the 70s and 80s there were a lot of resources for Neill and when there weren't?

Let's just say I WISH I'd been around when the school board tried to tell my mom that Neill had to go to the horrible county school. Because I know her neck started swiveling and her finger went up and she said something to the effect of, "BITCH, PLEASE." And just in case the board didn't hear her the first time, she sued their asses. An excellent example of why you do not mess with mama bear. Because she will take you to court for eight years until she wins. Haza! 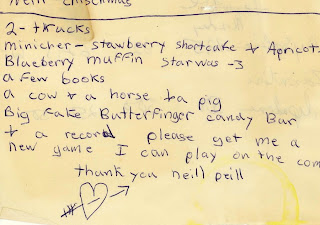 Sometimes I was nice and did things for Neill that he couldn't, like write his Christmas list.

Some of this list, the trucks and books, makes sense. That part of the list is still relevant; This past April Neill got a book for his 35th birthday that was read to him back in elementary school.

As for some of the other items? The "minicher" Strawberry Shortcake was an obvious scam to get a little present for myself out of the whole deal, the big fake Butterfinger candy bar would have just been stupid, and a cow + a horse + a pig, while right up Neill's alley, weren't practical for the suburbs.

In some ways, Neill hasn't changed that much since I wrote this list. He has new interests - country music, flashlights - and a WICKED toy snake collection but he still loves horses and pigs. He still has seizures and a temper and a tendency to hit me when he's not hugging me and crowing my name, "Kah! Kah!"

He still has a good sense of humor and totally infectious laugh and an increasingly flexible vocabulary of cuss words with which to insult me (fucker, punk bitch).

"I CAN'T SLEEP IN YOUR BED BECAUSE I'M FAT?"

After he says this, he smiles all devious-like. He knows what he's doing. And then he tells me that he loves me. I ask you, who exactly is the punk bitch around here? Hm, Neill? 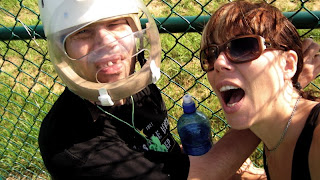 This is a photo from last weekend when I took Neill, his unstoppable legend t-shirt, and his green shamrock necklace name tag (?) to Lunken airport to watch planes.

We'd been standing near the end of the runway for awhile and there hadn't been many planes. I started up a cheer.

I'd pump my fist in the air and point at Neill for his parts and he was really good on the "planes", not so much on the "now". 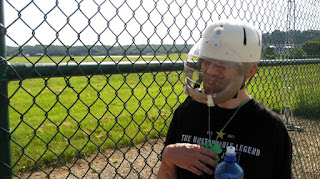 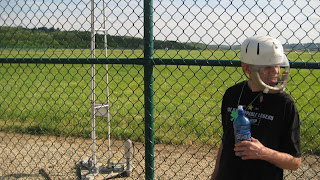 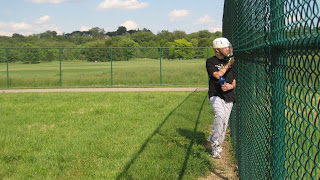 Is it just me or does Neill really know how to rock a seizure helmet?
Posted by ronckytonk at 2:00 PM

I'm going to risk sounding gay and cheesy by saying this: your posts about your bro are really sweet and they make me smile.

haha you're gay and cheesy.

Damn your family is amazing.

I, too hit my disabled sibling, a sister who bit me in exchange. And life WAS normal. And maybe our parents were smart to find each other, for all of us.

Your musings remind me of some things your mother has said before(sorry-saying we've turned into our mother is a bad word in my house, but you can't avoid it)

I ran into your parents outside my parent's house the other day and your father pulled out his cell phone to show me this web address. I'm going looking for the 'spice girls' picture next.

Hi Sarah! Don't even try to find the Spice Girls photo. It got embarrassed and went underground. Being paraded around for your parents and Amy was the last straw and it's now in hiding.

Jessica,
What a wonderful tribute to your brother..Shauna, Rod and I just read it and it put a smile on our faces..come by the store to say hi, Sue

hey there Sue, I'm sorry I was so lame while in Cincinnati and didn't come by until I was literally on my way to the airport to go to LA. (you weren't working) But I'm moving back in Sept so will be around a lot so we can hang and talk shit about my dad then!
ps just kidding. about the dad part. maybe.

What a loving story; it is a tribute to your whole family.

You and your family have created a better life for all of us. Neill is indeed, The Unstoppable Legend! And yes, your Mom can "kick butt" with the best.
Did you know that Roncker v. Walters is discussed in college textbooks? It was the first case under the Individual with Disabilities Education Act that went all the way to the Federal Supreme Court. It is sometimes even an exam question--imagine that!

I loved the letter to SAnta and how you snuck in some of the things that you wanted. You were such a cutie! Still are!

Jessica,
I like your blog; I love your piece about Neill. Your affection for your bro really shows through. But what I want to express here is my admiration for Mary Ann and Bob, who manifested and who continue to manifest the BEST kind of love two parents can have for their child(ren). Their persistance and
fight to keep Neill in the mainstream stand as an example to all of us.
What a great family!
Keep it up, Ronckytonk. You're doing great stuff

Jessica,
I like your blog; I love your piece about Neill. Your affection for your bro really shows through. But what I want to express here is my admiration for Mary Ann and Bob, who manifested and who continue to manifest the BEST kind of love two parents can have for their child(ren). Their persistance and
fight to keep Neill in the mainstream stand as an example to all of us.
What a great family!
Keep it up, Ronckytonk. You're doing great stuff

Neil always gets a shout out from me because of that famous one word: DONE! I shout it out when I'm frustrated or tired or silly or happy or DONE! Then I have to tell the Neil story and it always makes people smile.