Yesterday I did something big: I sent all my things in LA back to Ohio. Normally this wouldn't be news since I tend to move all my belongings thousands of miles every few years but this time it was different. I didn't get neurotic, I didn't go on an internet shopping binge, I didn't even stress. I EXPERIENCED EUPHORIA. What?

I arrived in LA a week ago, went to my storage space and pulled bags out to repack for the summer. I shoved my bicycle in the SUV that the tour rented me and took it to a shop to have boxed up. And I found things in the space that I'd forgotten about, like the Party Box. If I weren't so happy right now, I could easily name it something else: Bitterness Box, Angry Break Up Box, I Bought The Alcohol So I'm Taking It With Me Box. I opened the box and laughed, "I'm gonna have a great party when I get back to Ohio!"

In the box: a bottle of wine, a bottle of Veuve Clicquot champagne, and two giant jugs of whiskey and tequila. There was margarita salt and a mojito kit. A fondue set that Gail sent me as a housewarming gift when I moved to LA.

Last year, a few months after I broke up with Frank, I was in Berlin telling Charlie what happened. I confessed that I was being petty the day that I bought a cooler at Target, went back to the house I'd moved out of, and took beers out of the fridge while my ex-bf sat at the table in the living room.

"Well," Charlie said, "If that's all you needed to reclaim in order to get control of the situation then that's a good sign."

Hm. I hadn't thought of that. I thought I was just being a brat. And it wasn't all I needed to reclaim (respect for my individuality) but in some shitty little way, that act made me feel better.

I got up early yesterday and was dragging bags out of the space and into the car before it was even screamingly hot out, notable since the temperature in Los Angeles has been hovering around BLISTERING. But I was merry even when I realized that I had 25 pieces (backpacks, duffel bags, suitcases, boxes) to send home and I came out here with something like 15. I've accumulated more stuff, house stuff, books, and let's be honest, shoes. I didn't care. Though my parents might when Fed Ex dumps it all on their front porch in four days.

I drove to Fed Ex and commenced dragging everything to the shipping desk where I received a lukewarm reception.

"How much do you have?" The shipping clerk asked me.

I parked illegally and began scurrying back and forth between car and shipping desk. In between runs, I'd lift the bags onto the scale for the clerk and his painstaking process of weighing and measuring and entering numbers into the computer. Later I moved the car to a parking garage and finished packing the final two bags. This is when I started laughing at my unorthodox packing methods.

Will I remember that I bubble-wrapped a pirate mug and shoved it into a fur-lined boot or will that be a surprise in three months? I know I'll be pleased to re-discover the big duffel filled entirely with hair care products. Like three years worth. Not that I'm high maintenance, I just get gifts from stylists and sponsors on tour and no matter how puffy my shit gets, it takes a while to use up 29 tubes of smoothing creme.

Two hours later, the Fed Ex guys have warmed up to me. I've gone from being the girl who's taking up all their time and holding up the line to their #1 customer. My main dude's name is "Grigor (Greg)". That's what his name tag says: Grigor (Greg). Which seems like a waste of parentheses but whatever.

"I take it you're leaving for good?" he asks.

His co-worker is ALSO named Grigor and Grigor 1 and Grigor 2 are a good team. Grigor 2 hauls my tagged bags into the back room and performs a little skit about how heavy they are, groaning etc.

"Yeah, I carried those all in here," I remind him, "AND out of my storage space."

"I need to get on your training plan," Grigor 2 says.

Grigor 1 asks me about Ohio and what the work market is like. I tell him that I freelance and can live anywhere. If I need to work in LA, I'd rather get paid to be here than the other way around. He tells me that his cousin works for a company in Boston, a bearings company. He makes sixty dollars an hour. I nod, impressed.

Grigor 2 sticks a red Fragile sticker on Grigor 1 and says that his heart is soft. Grigor 1 pulls it off in disgust. 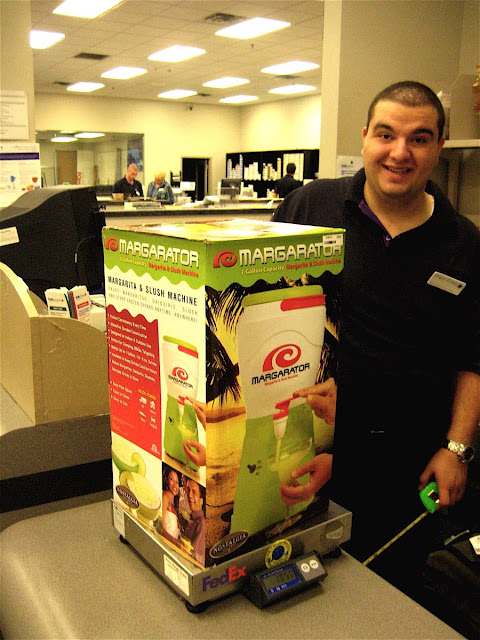 We are getting close to the end. Almost all of my things have been measured and weighed and I put one of the last boxes on the scale: THE MARGARATOR. It weighs 10.5 lbs.

"Did you just use that box or is there really a margarita machine in there?"

I scrape the price tag off the box. No one can know how much I paid for my Margarator, how weak that weak moment really was. Grigor gives me the grand total and after I recover from shock, I smile, thank him and leave. I can't wipe the smile off my face. I turn the music up and roll the window down. I wish I'd tied some tin cans to the bumper and painted congratulations on the windows of the Rav4.

Something that could have felt sad - moving away from LA - something that could have felt like a failure, felt like a success. I'm elated because everything I've done since September has felt right. I spent so much time last year second guessing myself and allowing someone else to dismiss my perspectives. If nothing else, in September I broke up with Frank on my terms: unequivocally. And my refusal to permit any gray area on the subject pushed me forward.

Your exuberance is contagious! I'm almost excited to see all your s*** arrive on my doorstep!

rock on ronker, you are the best. I hope you have an amazing summer. your berlin blogs were stellar

I can't believe Yo Mama actually typed in a swear word (well, technically a s with a ton of asterisks) I am so happy for you. Maybe, possible, perchance even this might mean we will one day share the same airspace and time zone?

Be Safe, Sane and all my love