I met Carl when I was 25 years old. I was living in Seattle and his business partner hired me to bartend in their new Irish pub, Mulleady's. Carl wasn't in on the hiring process which was fortunate; I don't know that I would have gotten the job otherwise. Carl called me a princess the first time we met. He and Dave Mulleady held an employee meeting to set up the shift schedule and I mentioned that I couldn't work one of those first days because I'd be in San Francisco visiting a friend.

Granted, this wasn't the best way to start a job, but surely I made up for it in ways that I can't think of right now. In any case, Carl wasn't impressed. "Princess over here..." he said. Oh Carl, you had no idea what you were getting into. You should've just fired me on the spot thereby ensuring that this photo would never end up on the internet. 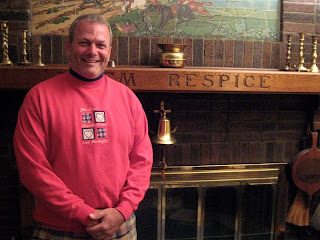 I took this photo of Carl last week. He is standing in front of his mom Phyllis' fireplace wearing a sweatshirt that he bought at his aunt's garage sale, a shirt that says, "Yes, I'm a GRANDMOTHER and proud of it!"

For once, I did not add those caps for emphasis. This sweatshirt is emphatic all on its own. Other features include quilted hearts and a little blue collar coming out of the neck so it kind of looks like Carl has a mini turtleneck on underneath. Here, let's get a closeup. Um, grandma? Your hands are scaring me. 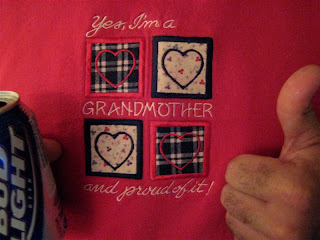 I remember the happy day that Carl and I realized that we were both Ohioans. A few years later, I drove north across Ohio, up to Lake Erie, and went to Vermilion when Carl was home visiting his mom Phyllis. I met an army of aunts and uncles and neighbors and got in on some good small town gossip. I went to the fish fry at Amvets and learned the Vermilion Sailors fight song, the only part of which I can remember now is FIGHT! FIGHT! FIGHT! WIN! WIN! WIN! which is pretty much every fight song in the history of time. 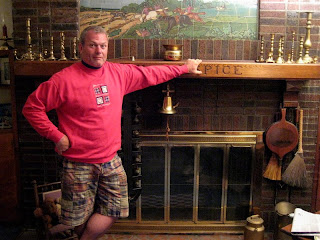 I played Cranium with more relatives - Carl drew me a family tree to try to help me keep all the Bevs and Bobs and Pats straight - and learned that I'm completely useless unless you ask me to spell something backwards. Then I'm suddenly fucking gifted.

This past visit with Carl was short but totally worth driving four hours and taking a few wrong turns down state and county roads. Even if I hadn't seen the Amish kids who were selling something by the side of the road appear to get all pissed off when I didn't stop, it would have been worth it. Side note: Are Amish people supposed to get mad like that? I feel like they're not but maybe I'm confusing them with another religious sect.

Because the last time I saw Carl was when he gave me shelter as a breakup refugee and I spent most of that time crying into my wine glass and walking silently through the woods, deep in my black hole of heartbreak. This time I was happy! And I'd forgotten how much Phyllis' backyard, right on Lake Erie, kicks ass. And how much I like ribs and beans and cole slaw.

At the end of the night I watched Carl pack for Seattle. He was trying to impress me with his system of stuff he keeps permanently in drawers at Phyllis' house so he doesn't have to pack as much when he pulled out a pair of jeans.

"These are my jeans," he said, "In case of emergency."

"What kind of emergency would call for jeans again?"

This is where you should know that Carl always wears shorts. Always. Carl hates to not have shorts on. When I once asked him why he only wears shorts he said, "YOU WOULDN'T KEEP A SPORTS CAR IN THE GARAGE WOULD YOU?" A fine, fine answer.

To my jeans-emergency question he replied, "In case I get invited to a party. A jeans-only party."
Posted by ronckytonk at 5:03 PM