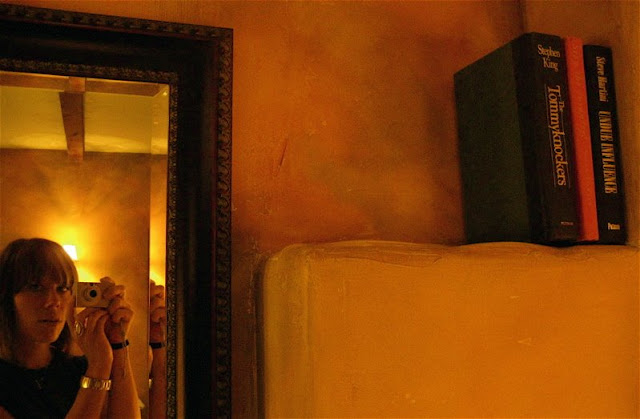 I was inspecting my room at the hotel in Arizona when I saw the books. I stood on tippytoes to read the spines: The Tommyknockers by Stephen King and Undue Influence by Steve Martini. Fittingly, wedged between the two, was Stop the Insanity! by Susan Powter.

Okay. Stephen King, whatever. Beloved by many people, I've never really gotten into him but I thought his book about the writing process, On Writing, was pretty good.

Susan Powter I remember from television commercials in the 90's. I didn't pay attention to her and there's a part of me that regrets that because I suspect that I'd agree with some of what she had to say about health and fitness and the horrible diet industry.

But I was too busy being turned off by her aggressive approach. She always spoke in caps and couldn't stop telling everyone to stop the insanity and was so fucking JAZZED all the time that it made me want to immediately turn off the TV, light a cigarette, and eat a whole box of non-fat cookies.

People on a mission are passionate, I know. I just happen to prefer that they'd casually mention their passion and then give me some time to let it sink in. They don't have to yell in my face; that makes me anxious. The third book on the shelf, the one by Steve Martini, stopped me for a minute. Why is his name so familiar?

OH YEAH. I decided back in April that I hate that guy! Before I found a good crime story to read in Berlin, I tried to read Steve Martini. I hung in there for like 180 pages until I finally admitted that the book was formulaic and boring. I decided at the very end, with only a few pages to go, that if I died I'd be happier NOT knowing what happened. Knowing which yuppie lawyer got pushed off a Mayan pyramid would actually make my death less meaningful. So I closed the book.

And now? Two months and nine time zones later? Here he is again. In my bedroom. What Steve Martini needs to know is that I've moved on.

These are the books that I packed in my suitcase for the summer:

1. The Seduction of Place: The History and Future of the City by Joseph Rykwert
2. The Art of Travel by Alain de Botton
3. Nobody Passes: Rejecting the Rules of Gender and Conformity, Edited by Mattilda AKA Matt Bernstein Sycamore.

I brought the one on cities because I like thinking about how environments affect people and vice versa, the one by Alain de Botton because anything he writes inspires me and makes me laugh, and the one on gender for a few reasons.

I heard about Nobody Passes on mimi smartypants and I perked up because the book was published by Seal Press, where I interned in Seattle.

Everyone should question themselves as much as they question others.

I don't always do this. I can be a self-righteous and assuming and that's why I liked this book. It reminded me of going to school at the Evergreen State College in 1996. I drove to a Gender Studies conference in Portland, Oregon with my professor, the only student in my class who wanted to go. I went because I was curious about gender regardless of the fact that I was fairly f'ing certain that I was a straight girl. I wanted to know what other people thought.

It made me think about how far, at times, I've strayed from that point. How simplistic and limited I can be when reading people. I just recenlty found out how much I influenced Charlie when we met in New York. How my work at the Feminist Press and the people I exposed him to gave him the first few words of a language that he took home with him and began to master. It changed him and now he's fluent while I still speak baby talk.

It hit me one night in Berlin when I was in a room surrounded by people who many others might wrongly - in ignorance and fear - call freaks. Charlie introduced me to someone and said, "This is Jess. I stayed with her for five months in New York. She saved my life." I was struck. I was in a space where I didn't look like I belonged. I'd had, in the past, some influence on someone there yet in the present I had no idea what was going on. I didn't feel uncomfortable, though. I felt curious.

Inga Muscio, another Seal Press author, wrote about how certain books saved her life. I believe that. And when it comes to my life, I'm not relying on Steve Martini.
Posted by ronckytonk at 1:21 AM

And glad you enjoyed the book...