I returned from Chimaltenango and said hello to the dentists who'd stayed at the clinic in Tiquisate. I asked them how their day was and one of them told me that they illicitly pulled a few of Luis' teeth. Luis is the soldier who guarded our door daily and ushered in patients. He also, conveniently, held the hands of a pretty young thing who was nervous about getting her teeth ripped out of her head and would feel ever so much better if a handsome boy in uniform pressed his palms into hers.

Luis is also the guy with the giant gun who one day sprinted down the main hospital corridor with his finger on the trigger. To what emergency he sprinted I don't know but he had a smile on his face the whole time. I found it unnerving but to him it was no big deal.

What was a big deal to Luis, though, was the fact that his teeth were rotten. He wanted our dentists to pull them but they weren't supposed to because he wasn't allowed to leave his guard post. EVER. There was also some arbitrary rule about how he couldn't continue his army service if he treated his problem. What? 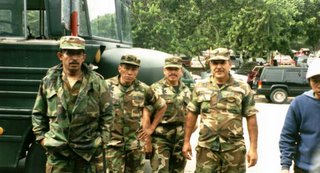 Another translator, a Peace Corps volunteer in Guatemala, said not to even bother deconstructing unreasonable laws. Just accept.

Luis, however, was tired of accepting and his teeth hurt like a motherfucker. He had a rebel streak and the day we were in Chimaltenango he organized his defiant act whereby one dentist stood on lookout for other soldiers while Luis took a shot of anesthetic in his gums. Under orders, the dentists began yanking furiously and got the teeth out in unheard-of timing, with not a peep out of Luis. And you know that hurt.

I was sent the following photos by Mark, seen here modeling Luis's gun, and I don't know about you but I get the feeling that THE DENTISTS WERE HIGH on disobedience. They were smoking rebellion and such elevated levels of giddiness led to all sorts of unorthodox dentistry. 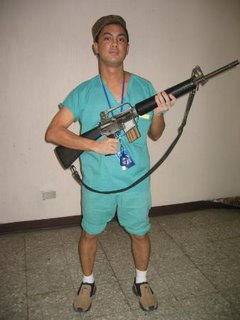 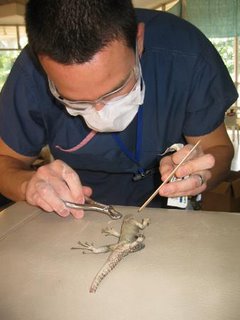 Posted by ronckytonk at 5:51 PM