Yesterday I got to do several things that I really like:

1. Drink refreshing beverages out of plastic bags (yesterday was water but I've done beer and soda in the past)

A group of 30 of us planned to hike up the volcano of San Salvador. There were a bunch of university students, my hosts and former Bronx roommates Melissa and Coco, and Coco's friends from the youth group Movimiento Generacion 21. The hike was meant to last an hour and a half and the National Civil Police agreed to send a few officers to escort us for safety because in El Salvador you need this. At the last minute, one of the guys from the youth group didn't show, the one who knew the way to the top of the volcano.

"No te preocupes," said the policeman, "I know the route."

At the beginning of the hike, I was at the front with the policeman. He told me that he'd only been on the volcano one time before, on a motorcycle. I didn't find this alarming since surely the trail was marked and we'd follow it easily. I'm a sucker. 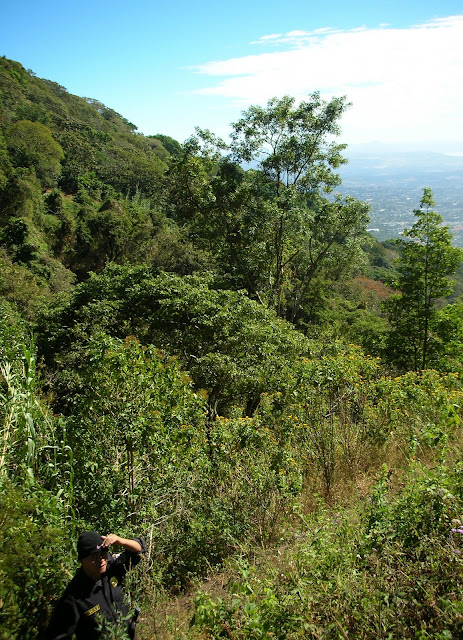 Within a half hour, the policeman couldn't keep up and had dropped to the back. We kept stopping so that the group could stay close together since it wasn't safe to have hikers at front alone in the brush. Three hours later the whole "safety first" angle had been dropped in favor of just either going somewhat UP, since we had been across, down, and around the mountain, scaling reedy open faces, and ducking through coffee farms and it didn't seem like we'd gained much altitude at all. 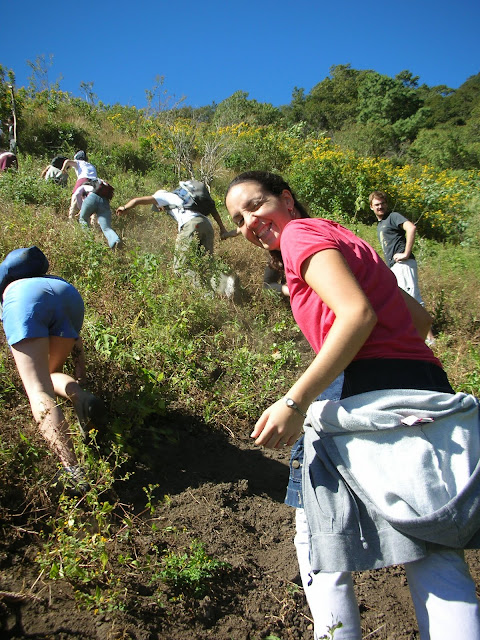 Here you will see Melissa not losing her sense of humor.

Four hours later we just wanted to get to the road we knew was on the other side of the volcano.

At one point a tiny indigenous man hopped past us carrying his own weight in flowers in a bundle on his back. He pointed us in the right direction and kept going. All this while the policemen happily carried up the rear, one of them listening to salsa music on the radio strapped to his shoulder.

FIVE HOURS LATER we made it.
Posted by ronckytonk at 11:29 AM

Wow. I can see the news now. Hot Rock Star-esqe blonde gringa found twenty-years later cooking friojles for mountian people. Ask is she remembered her name, she said "Si. Me Llamo Mujer de Friojles". I know I spelled friojles wrong but that's not the point.
Love,
ME