Keep your firetruck away from my airplane 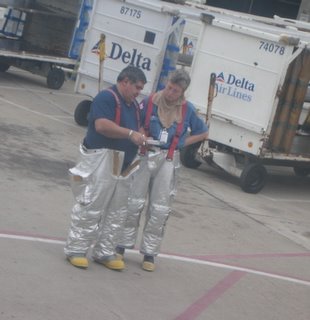 Firefighters. Not who you want to see on your flight.

When I walked onto the jetway this morning at 6:30 am, the flight attendant on flight 5490 asked me if I was comfortable sitting in the exit row and I smiled broadly, "Yes!" because exit row is spelled l-e-g r-o-o-m.

Not long after taking off the captain announced from the flight deck that the loud noise issuing from the aircraft, in case anyone was wondering, was a device that pops out to help with hydraulics when planes lose power.

He assured us that we had power but couldn't fly all the way from Austin to Cincinnati with things popping out so we were going back to Austin just as soon as we'd flown around in circles burning enough fuel that the plane was light enough to land.

Scared of swimming in large bodies of water? Quit worrying about snakes and start focusing your irrational fears on the rootless, carnivorous plants known as bladderworts

- and looked at the emergency exit door to my left.

"Shit," I thought, "I might actually have to use this motherfucker."

I studied the diagram of how to lift, pull, and twist the door to open it and then immediately started picking little yarn balls off my wool sweater like nobody's business. (Though it became the business of the guy sitting next to me when I accidentally jabbed my elbow into him as I went after a yarn ball under my arm).

I realized that I was engaging in a stress-related neurotic activity in public and while I was glad it wasn't the usual SRNA - pulling out the hair behind my right ear - I decided to cut it out.

When we landed there was a firetruck waiting on the tarmac with its lights flashing. The man with whom I'd broken the ice by giving him an elbow-shaped bruise leaned towards the window and said, "Look who's waiting for us."

All I said was, "Not cool," but what I was thinking was, "Those dirty liars in the cockpit said this wasn't a big deal."

He and I agreed it was probably either a procedural thing or the men and women of the airport fire department simply wanted a break from their pinochle game.

We waited around while fire and maintenance people trotted on and off the plane and did paperwork and fixed the popping thing so we could get a move on. Apologies were given several times on Delta's behalf for the inconvenience and we took off again.

I re-focused on my magazine and my row mate went back to his crossword puzzle but in no time flat there was a loud K-THUNK and he and I looked at each other as quickly as two people can possibly look at each other. I believe it is called SNAPPING TO ATTENTION. And thus the episode repeated, though this time Delta concluded that it would be better to re-route everyone on other planes.

I thought about fear and how, tiny yarn balls aside, I'm a pretty unflappable airline passenger, sometimes to the point of bring-it-on fatalism. I wondered how I got this way since as a kid I was ridden with phobia.

My mom will remember a particular trip to New York that she and I took when I was 10 years old and how much fun it was for her since I was terrified of 1.The plane 2.The subway 3.The elevator 4.The escalator and, most of all, 5. The hotel.

The hotel freaked me out so much that I can tell you now, 20 years later, that it was the Barbizon Plaza Hotel and our room was on the 36th floor. I KNEW that there was going to be a hotel fire that weekend and that I would be stuck on a ledge, hanging by my thumbs, having to jump to a trampoline with a target in the middle, 36 floors below.

I spent a considerable amount of time brooding over the directions to the stairwells posted on the back of our door and wondering if our bedding was flame retardant.

I also drew strength from imagining the scene in the movie Annie where little orphan Annie is suspended high on a bridge waiting for Punjab to rescue her from a helicopter. Yes, I did. In fact, I think I might have to remember that tactic for next time.
Posted by ronckytonk at 1:13 PM

and i didn't think you were afraid of anything. incidently, those little yarn balls are called "noils". swear to god. and don't ask why i know that, i just do, so leave it alone. welcome home.

you are asking too much of me, baguba, and you know it. we shall revisit the subject of noils later.

i know you, some of you're habits and that is just about the funniest fucking story i have read in ages. ah, i can picture you so well during this whole scenario...welcome home konks. glad you're safe.

My mom has reminded me that I was also afraid of 6. The Park. Central Park. Because everyone wants to mug a 10-year-old with glasses, a bad haircut, and a sailor outfit.