One night in Tiquisate, over a dinner of beans, eggs, and Gallo beer, this story was told: Ana, a translator, had been camping on the beach in Esmeraldas, Ecuador when red sores developed around her toes. The sores swelled and grew pustules and Ana thought she had a strange case of foot acne. When the zits didn't go away after several weeks, she decided to pop them.

What she didn't expect was that WORMS SLITHERED OUT FROM UNDER HER SKIN.

"That is the most disgusting thing I can imagine," I said to mom

"What about worms crawling out of your eyes or mouth?" she replied.

You got me. But I kinda thought you had to be dead for worms to crawl out from your eyes. I was WRONG. Laurie, a nurse practitioner, piped up and said that it sounded like the work of a Bot Fly. 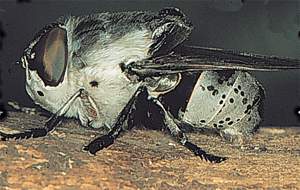 Bot Flies are big, hairy flies that sort of look like bumblebees but instead of flowers and honey, they glue their eggs onto mosquito abdomens and then slip into the people or animals that the mosquito bites. Inside, the larva grows for six weeks until it's ready to hatch into the world outside of our bodies. If, for some reason, you have a bot fly larva in you and you don't feel like waiting for six weeks to meet it, you do have options.

You can suffocate it. There's a breathing hole in the sore and you can:

1. Immediately apply Tiger Balm or Vaseline to every mosquito bite you get in the tropics thereby ensuring that the grubs choke to death before they can have their way with you.

2. Wait and see if it looks like there might be worms growing inside and then tape a cotton patch soaked in camphorated oil to your skin. Wait 8 hours, pull off tape, and there should be a dead worm at the surface.

3. Drink a bottle of Coca-Cola or whatever refreshment is available. Smoke a cigarette and then blow smoke into the bottle. Hold the bottle over the sore and wait for the larva to come up for air. Ask a couple of friends to help you push the worm out with your thumbs.

Note: May take more than one attempt.

Two other translators at the dinner table, Alysa and Nancy, knew someone else who had a Bot Fly in her rear end. She, too, had no idea that her butt had become a larval incubator until it stuck its head out and looked at her and husband. Apparently she didn't react too well. 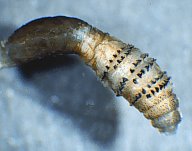 If you were unfortunate enough to click on the eyeball photo above, you'll probably understand why, when I saw it on the web in an Antigua cafe, I yelled "Oh my God!" and twisted away from the computer with my hand over my eyes. The man sitting next to me leaned toward my screen and said the same thing in almost exactly the same pitch as I had. I don't know if his hands were over his eyes, too, since I was still twisted into a ball, lightly hyperventilating.

At that moment, I recalled a certain breakfast during my first year with the medical team in Guatemala, the breakfast where I first truly felt the divide between true medical professionals and part-time frauds and hobbyists like myself.

The night before, in the operation recovery room, a woman was sick and hurled up a bucket of worms. Yes, that's right. So many worms came out of her mouth from her stomach that the nurse ran and got a bucket.

I'm not saying that the nurse on duty LIKED the fact that someone did that on her shift, but she saved the bucket and told everyone about it at breakfast. And no one else besides me seemed to think that maybe breakfast wasn't the best time to be talking about it.

They were all excited and some of them found it professionally fulfilling to get up right then and go look in the bucket. Whereas I stared cross-eyed, drooling on my scrambled eggs, until I left the table. While I don't usually think I'm cut out for office work, my publishing desk back in New York seems mighty safe right now.

Coming soon: Stories about when we had to run to the hardware store because someone was getting their leg amputated.
Posted by ronckytonk at 11:49 AM

Roncks,
DAMN that's some nasty SHITE! Thank God I didn't click on the picture. The ones posted were enough...I'll take the Hood any day to worms underneath my skin.