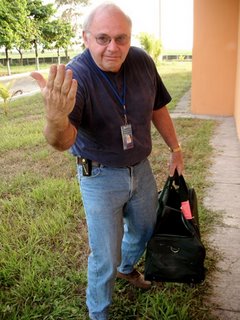 When Henry picked me up at 6 am from the Tiquisate hotel, I was under-caffeinated. I mumbled good morning to the dentists in the back of the minivan and slumped against the front seat. We scooped up pediatrician Dr. Mier and his wife, Rita, from the hospital and were off to Chimaltenango, to the home for disabled children.

I woke up quickly when we hit the highway. The roads are narrow, speeds are fast, and passing cars regardless of oncoming traffic is the norm, despite blind turns and way too many trucks that are plastered all over with the words INFLAMABLE.

In the front seat as designated navigator, I held a piece of paper with the map that had been hand drawn for us the day before: four town names with a black pen line squiggling between them.

I asked him, "Where'd you learn to drive like a Guatemalan?"

"Oh, I've been coming down here for twenty years now," he said, "And I've driven trucks for years at home."

Henry is 62 years old and a former 18-wheel Coca-Cola trucker, beef cattle farmer, and tobacco farmer. He's from Lexington, Kentucky and works part-time driving dairy products to Cincinnati for the Kroger company. His degree is in Dairy Science.

The first time Henry got on a plane to Guatemala he didn't know where the country was but he'd heard about the Children of the Americas medical mission from a woman at his church and signed up.

Late that afternoon, on the way home, I translated road signs for Henry that he'd gazed at for 20 years without understanding, and we both learned new words. Our favorite was tumulo.

The first time I read the sign TUMULOS AHEAD I admitted that I didn't know what a tumulo was and had to look it up. We found that it meant "hump".

"You're supposed to be the Spanish expert," he shot at me.

"Well, I'm sorry but HUMP hasn't come up that often!" I said.

Henry taught me how to flick someone off Guate-style as demonstrated above in the photo of Henry. When we got back to the hospital I told him that I needed him to give me the finger.

"Yes you can, Henry. I need you to act really pissed off at me."

Henry took a deep breath, took a step back, started walking towards me and said, "YOU MOTHERF-" and I snapped the photo.
Posted by ronckytonk at 9:33 AM

That's how I flip off my students! I didn't even know it. I kind of love that.

Woops. My spelling and grammer is a bit rough, huh?
b2