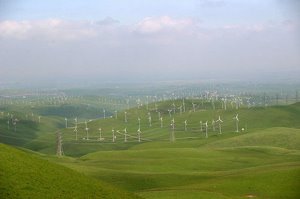 I am learning so much on this drive from San Francisco to Austin. Example: I'd never before read the Hudspeth County Herald (Texas) or heard of Merle Lutrick, columnist.

In the most recent issue, Merle goes off on windmills which I love since I had JUST been thinking about windmills. Seriously.

Driving east from the California Bay Area, Route 580's hills are sprinkled with windmills. At least that's what I assumed they were.

I hadn't really seen windmills before and they are way more spiky and serious looking than the boxy Dutch things I associate with clogs and tulips. I wasn't even sure these things were windmills but they had blades and were turning in the wind. Therefore, windmills.

Hours later, on the stretch of I-10 known as the Sonny Bono Memorial Freeway, there they were again, now spooky in the dark.

This is what Merle and her exclamation marks had to say, "You would never guess what has been standing in my living room since last night (Christmas Eve)!! - our surprise this year was an eight foot windmill. Yes!!"

Merle loves windmills. She grew up in the Texas panhandle where the breeze blows regularly and every farm had windmill power. After Merle married she got electricity, but until then she had a windmill. And until this Christmas Eve, she had been without one.

Suffer no longer, Merle, someone in your family kicks ass and got you the best Christmas present EVER. 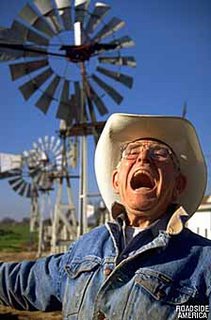 Today's wind machines are fiberglass and the wind farms are clustered around smooth hills, open plains, and mountain gaps. California uses the most wind electricity followed by Texas, Minnesota, and Iowa.

And although only a teeny bit of the country's electricity today comes from windmills, Merle points out that not long ago they were a necessity, and for some people, something to get excited about.
Posted by ronckytonk at 2:56 PM