This year I will express my patriotism 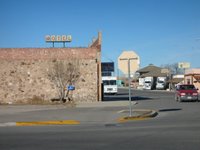 The Hudspeth County Herald is a newspaper out of Dell City, Texas. I picked it up at the Exxon station in Sierra Blanca the morning that Jimmy and left town as fast as one possibly can in a 17-foot truck and 10-foot long car trailer.

Why were we in a rush? I'll just say that we spent the night with my giant North Face backpack bracing the door for security and Jimmy banned any bare feet from touching the carpet. Sierra Blanca is not a dream resort. Unless you've always wanted to start in a horror movie.

Yesterday reading the Hudspeth County Herald was on my to-do list and I managed to wedge it in between margaritas and checking out the pool. The paper has a homey we-all-here-know-each-other vibe and is chock full of all sorts of information: recipes for taco meatball appetizers, a column by a man named Tumbleweed Smith (I am PRAYING that that is his God-given name), and a cartoon called Cowpokes.

There's also a message from The Heritage Foundation president about winning the war on terror and new year's resolution advice from Congressman Henry Bonilla. I don't do resolutions but in case anyone else is into that sort of thing, I'm here to tell you that he cautions you to be flexible.

The Congressman admits that there is value in standard resolutions such as losing ten pounds and keeping it off but thinks that perhaps we need to set our sights a little higher. So as to squeeze into the star-spangled clothing that we've grown out of perhaps?
Posted by ronckytonk at 4:55 PM