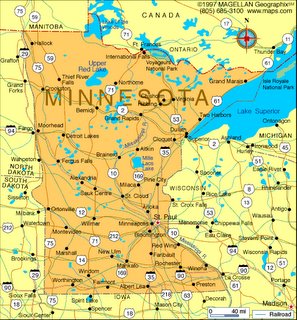 There is this state in the union called Minnesota. (For more on how I really feel, please refer to entry 'You messed me up, Minnesota').

I just received a telephone message from my favorite Minnesotan, Gail, that was
garbled so I left her this message:

Gail called back to inform me that she had participated in an ICE FISHING EXTRAVAGANZA but that she didn't win $150,000, which is really too bad because she could have started a college fund for her future children or she and I could have gone on a safari.

Way to go, Gail. You're practically forcing me to buckle down and get a real job. In any case, Gail's conduct last weekend was that of a true Minnesotan: cute, lovable, endearing, and nuts. 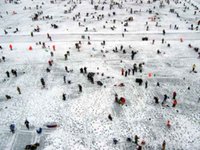 The 16th Annual Brainerd Jaycees $150,000 Ice Fishing Extravaganza consisted of 11,300 people gathering on a 250-acre patch of Round Lake ice.

From noon, WHEN THE CANNON WENT OFF, until 3pm, the contestants fished at their holes hoping walleye, perch, crappie, and tulibee would bite in weather that was significantly below freezing. If they caught a fish, they'd plunk it in a bag or bucket of water and hustle over to the weighing/judging tent to register it.

I threw a fit when Gail revealed that she didn't take any photos of herself on the ice but she placated me by talking about the fact that she was wore handwarmers, feetwarmers, and a backwarmer underneath her bundles of outerwear. Gail went toe to toe with guys like this for the big money. 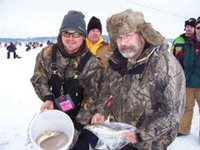 Those with the largest fish of the day won true Minnesota prizes like a trucks, all-terrain vehicles, cash, fish trap ice shelters, and ice fishing suits (note: what?).

The guy in the middle of this photo, Christopher Smith of St. Cloud, won 100th place for catching a .38 lb perch and was awarded $10,000 cash. Goddamn. 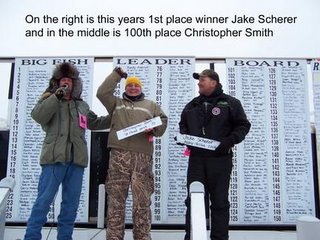 But it wasn't just about wintery hijinks and getting rich.

As already noted, Minnesotans have heart and the Brainerd Jaycees are no exeption:
seventy percent of the funds benefited disabled campers at an outdoor recreation facility.

And you MIGHT also recognize the Jaycees as the organizers of the Great Northern BBQ and the 4th of July Corn-Feed. Maybe not.

You won't catch me at any ice fishing extravaganzas since I consciously steer clear of Minnesota in January but I'll now admire it from afar. Any gathering with rules like: No Spears Allowed. Ice Chisels Recommended and FAQs like Q: Can I pull canvas over my head for protection? A: No gets the Ronckytonk seal of approval, if not participation.
Posted by ronckytonk at 4:32 PM

Jess... This is hilaarious and I can't believe that my 3 month pregnant daughter is a part of the "Tullibee" fish contest. But what would we do for $10Gs? After all, Minneapolis searchers for the "Winter Carnival Medallion" have one again come up with a $10Grand prize just for solving the puzzle and finding this medallion snuggled somewhere in the snow. The winners were HS boys who may or maynot put some of the cash away for their college tuition. What a bash! Anyway life goes on in Minnesota, the land of the brave!!!Marilu the Mom who wanted to make sure that her daughter's marriage was official!! I hear the officiator was on some tour with a rock group...could that be???

oh...uh...yes that was me, Marilu. Sometimes, when I'm not legalizing my friends' wedded unions, I'm making sure pop stars have clean panties and fresh towels. Now if I could just land a job substitute teaching for a certain Spanish teach in Minnesota (during the un-brave season), I'd be really happy. Now go put on an extra sweater.