After having lived ten days free of reminders or discussions of irrational fears, I must turn again to this compelling theme.

My fear-free week and a half ended this morning when I was sitting in the living room doing arts and crafts. I grabbed the remote to turn on the television for some background noise but all of my industry and concentration came to a halt when Tyra Banks launched into a tearful explanation of her fear.

Tyra, voice quaking, said, "I feel anxiety and I feel panic whenever I think about or talk about dolphins. I'm feeling it right now."

Cut to shot of Tyra talking to staff member at Sea World.

Tyra puts on a Sea World wetsuit and tries to get in a dolphin pool. The last thing the viewers see before returning to the television studio is Tyra climbing out saying, "I don't want to do this!"

Back in the studio, Tyra cried again and pressed her fingertips to her forehead to regain composure. She admitted that it's humiliating to not only a) Cry over dolphins but to do so b) In public.

She offered herself up for scrutiny, though, since today's show was all about crippling phobias and their inexplicable origins. Like a selfish cur, I instantly felt an overwhelming sense of buoyancy and gaiety. I thought of my all-time favorite photo of Lukas - 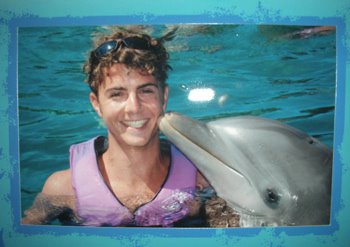 - as well as one of my favorite subjects: Neuroscience. Thank you, Tyra, for making this happen.

I stayed tuned long enough to watch the first guest's appearance. This young woman's fear is of pennies. She has no idea why she is terrified of pennies but she can't touch them, doesn't like to see them, and definitely doesn't like it when people tease her by throwing them at her.

She sat on the studio stool looking spooked, shoulders drawn forward, with all the body language of someone about to slip off, "SEE ya..this national television thing was a BAD IDEA." Tyra noted how uncomfortable she appeared and the young woman replied that she was scared Tyra was going to "come out with pennies." Tyra promised her that she wouldn't make her do anything she didn't want to do, but that she did have a idea of how to help.

Tyra produced a super fancy watch that costs $6,000 (600,000 pennies!) and rambled on about how expensive and exclusive it is. Then she announced that the same watch was hidden in a clear plexiglass box, underneath lots of pennies. The girl could have the watch. IF SHE COULD GET TO IT.

Tyra, nicely, did not throw her guest into the penny pit to watch her breakdown. She stood with her and they peered into the box together. A therapist in the audience reminded the girl that pennies are inanimate objects that cannot hurt her. The guest, who looked nonplussed at best, stared down and asked if she could have gloves, which got her some audience laughter. After more chatter and cheerleading, she asked Tyra if she had any clue as to which side the box the watch might be in.


Here I think Tyra grasped that her paralyzed guest might not be able to participate in her gambit without more intervention so Tyra let slip that it was probably in the middle and began digging around in the pennies herself. This inspired the young woman to stick her hand in the box, too, and rake her nails through the coinage long enough to excavate her prize. I wish I were too proud to admit this, but I'm not: I teared a little up at the look on the girl's face when she succeeded.

After wiping my eyes and shaking my head over the fact that my own emotions are so dang ACCESSIBLE, I turned to my greater interest in phobic fear: Where does it come from? What the heck?

According to Rita Carter in her book Mapping the Mind, 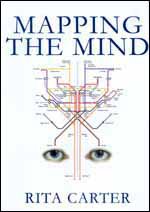 "The potential for certain fears seems to be hard-wired into the brain, like a faint memory trace of those things that have proved harmful to our species in the distant evolutionary past." Hm. Okay.

For explanation, others may lean towards past-life experiences or signals of traumatic memories that have been ALMOST repressed. One thing is certain. This fear is unconscious and therefore has something to do with your friend and mine, the limbic system.

The limbic system has been with us a long time: since we were mammals and not just reptiles or fish. Along with appetites and urges, emotions are unconsciously generated in the limbic system and fed up to the cortex of the brain, where they become conscious.

The amygdala, specifically, is where fear is registered and generated, where unconscious memories are stored, and where physical reminiscences, like sweaty palms and racing hearts, are produced.

"The irrational fear felt may be vague - a think cloud of anxiety - or it may be sudden and intense - a panic attack. If the feeling is provoked by a conscious stimulus, it may show itself as a phobia. Unconscious memories are particularly likely to be formed during stressful events because the hormones and neurotransmitters released at such times make the amygdala more excitable."

If the disturbance is exceedingly severe, it may actually damage another part of the limbic system, the hippocampus, causing the conscious memory of the event or period in someone's life to be fragmented.

Finally, keep in mind that the amygdala functions from birth while other brain parts take years to mature (the reason that we don't remember much before the age of three). Before our long-term conscious memories are up and working, that sneaky amygdala is paying attention to what's going on and taking notes. Some of those emotional memories that we don't remember may be lovely and some? They might be vexing. And only the amygdala may know why.

I didn't see the end of the Tyra show so I don't know if she ended up in the dolphin pool. I can only hope that one day she'll be as happy as Lukas.
Posted by ronckytonk at 7:49 PM