This weekend I took advantage of the car I stole from my mom three weeks ago and visited Ali Schumacher and her husband, Sam, in Rocky Ripple, Indiana.

Rocky Ripple could easily be mistaken for Indianapolis since it's just 700ish people smack in the middle of Naptown and doesn't have a town center or anything like that, only cute wooden Rocky Ripple signs and prideful Rocky Ripple bumperstickers.

Ali and I have been friends since we were both LADY EAGLES - runners on our high school track team - and we share the ridiculous habit of laughing at just about anything when we are within spitting distance of each other.

I can't tell you how many people we've annoyed with this behavior. I was sniggering and wiping tears from my eyes with one hand while the other hand hadn't even set down my baggage in the kitchen. Sam has had minimal exposure to us but was prepared and simply smiled calmly and leaned against the kitchen wall with his arms crossed.

I learned a lot this weekend. I learned that Rocky Ripple has a land area of 0.3 square miles and that it has one government employee, Marshal Mike, who lurks around and busts people for rolling through stop signs. I learned that Ali sometimes eats cherry pie for breakfast and lunch and I learned that the Traderspoint Creamery encourages people to stop by and hang out with their cows.

The Traderspoint Creamery has a farmer's market in a heated barn and I was happy to go on Saturday because I've liked the idea of heated barns ever since my first-year roommate in Minnesota showed me photos of her high school parties in Jamestown, North Dakota, ALL OF WHICH were keggers taking place in heated barns. 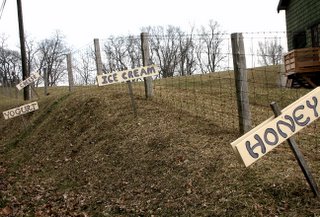 This barn offered much more than bad beer and a possibility of making out. This barn was full of wholesome goodness: greens, bread, honey, tea, coffee, two people playing banjos, and every pure, fresh, non-homogenized dairy product you can think of, including, of course, cheese.

A lot of cheese.

The owners of the Traderspoint Creamery believe in 'nourishing the land that nourishes us all' and I can tell you that I felt nourished just standing around there, though if I were I lactose intolerant I would have felt very nervous.

There is one other thing I learned this weekend. Ali and I were lounging in the living room, drinking red wine out of giant chalices and having a profoundly tangential conversation, and I said something that made her say, 'That makes me think of the word rhombus.'

Ali put down her chalice and made a rectangular shape out of her hands and then tilted it to the side.

I persisted, 'So then what's a parallelogram?'

And here we noticed that we were acting CONSPICUOUSLY nerdy and laughed hard enough to forget the question.

holy crap. i think we're losing her... quadra-what-eral?!?!? dear infinite jess- about the midwest.... GET OUT!!! get out while you still can. run, little ronckaroni, run.